A Race Round a Black Hole
So you think rockets are fast? Scientists have spotted something going much faster. Like state troopers on a highway, these scientists used a "speed gun" to clock clumps of hot iron gas whipping around a black hole at 20,000 miles per second. That's over 10 percent of light speed.

At this speed, you could get to the moon in about 10 seconds. The black hole's extreme pull of gravity is causing the gas to move so quickly.

Image to left: This animation depicts three hot blobs of matter orbiting a black hole. If placed in our Solar System, this black hole would appear like a dark abyss spread out nearly as wide as Mercury's orbit. And the three blobs (each as large as the Sun) would be as far out as Jupiter. They orbit the black hole in a lightning-quick 20,000 miles per second, over a tenth of the speed of light. Click on image to view animation. Click here for a high resolution still from the animation (9.8 MB) Credit: NASA/Dana Berry, SkyWorks Digital

Dr. Jane Turner of NASA Goddard Space Flight Center led the observation. She used a satellite launched by the European Space Agency called XMM-Newton. She said that this kind of measurement has never been done before.

"For years we have seen only the general commotion caused by massive black holes, that is, a terrific outpouring of light," Dr. Turner said. "We could not track the specifics. Now we can filter through all that light and find patterns that reveal information about black holes never seen before in such clarity."

This is big news for black hole hunters because the observation marks the first time scientists could trace individual blobs of shredded matter on a complete journey around a black hole. This provides a crucial measurement that has long been missing from black hole studies: an orbital period. Knowing this, scientists can measure black hole mass and other characteristics that have long eluded them.

Black holes are regions in space so dense that gravity prevents all matter and light from escaping. What scientists see is not the black hole itself but rather the light emitted close to it as matter falls towards the black hole and heats to high temperatures.

Image to right: This is a simplified illustration of two hot blobs orbiting a black hole, showing how scientists tracked the blobs by observing their Doppler shift. First, we see one blob. Note how the energy emitted from this orbiting material rises to about 6.5 kilo-electron volts (an energy unit) as it moves towards us, and then falls to about 5.8 kilo-electron volts as it moves away. This is the Doppler effect, the same phenomenon that law officers exploit to nab speeders on a highway. Matter goes round and round; energy goes up and down. About 14 seconds into the animation, the artist adds a second blob which also displays a rise and fall in energy during its orbit. Click on image to view animation. Click here for high resolution still from animation (3.0 MB). Credit: NASA/Dana Berry, SkyWorks Digital

If this black hole were placed in our Solar System, it would appear like a dark abyss spread out nearly as wide as Mercury's orbit. And the clumps of matter detected would be as far out as Jupiter. The clumps orbit the black hole in a lightning-quick 27 hours (compared to the 12 years it takes Jupiter to orbit the Sun).

But this black hole is far, far away. Dr. Turner's team observed it in a well-known galaxy named Markarian 766, about 170 million light years away in the constellation Coma Berenices (Bernice's Hair). The black hole in Markarian 766 is relatively small although highly active. Its mass is a few million times that of the Sun. Other central black hole systems are over 100 million solar masses.

Matter funnels into this black hole like water swirling down a drain, forming what scientists call an accretion disk. Flares erupt on this disk most likely when magnetic field lines emanating from the central black hole interact with regions on the disk. Zap! These flares are very hot. They glow in X-ray light, which is thousands of times more energetic that the visible light our eyes can detect.

XMM-Newton is a special kind of telescope that can detect X-ray light, but not visible light. The Hubble Space Telescope, on the other hand, detects visible and ultraviolet light, but not X rays.

"Calculating the speeds of the flares and the black hole mass was straightforward, based on Doppler shifting, the technique used by law officers to nab speeders." said Dr. Ian George of NASA Goddard. (Both Drs. Turner and George hold teaching positions at the University of Maryland, Baltimore County.) "Light appears to rise in energy as an object moves towards us and then fall in energy as it moves away. A similar phenomenon happens with the sound of a passing car on a highway, going 'eeeeeeyyoool.'"

When the scientists made a graph of energy (on the y-axis) and time (on the x-axis), they saw near-perfect sinusoidal curves from each of the three clumps of matter they observed. Up and down, up and down. The width (or period) of the curves is proportional to black hole mass. The height (or amplitude) of the curves is related to the viewing angle of the accretion disk.

With a known mass and orbital period, the scientists could determine velocity using the relatively simple and traditional physics of Isaac Newton. Scientists do these kinds of measurements in the Solar System all the time. For example, if the Sun were bigger or if the Earth were closer to the Sun, our orbit would be faster because the tug of gravity would be stronger. That is, mass, distance and gravity dictate the speed and shape of orbits. Knowing one set of information helps you determine the other.

Two factors made the black hole measurement possible. The scientists observed particularly persistent flares during a long observation, nearly 27 hours. Also, no telescope before XMM-Newton has had the light-collecting power to allow for a comparison of energy over time.

Dr. Turner said this observation confirms a preliminary XMM-Newton result announced by a European team in September -- that something as detailed as an orbital period could be detected with the current generation of X-ray telescopes. The combination of results indicates that scientists, given long observation times, are now able to make careful black hole measurements and even test general relativity in the domain of extreme gravity.

And moving 20,000 miles per second, these blobs around the black hole are taking scientists on an exciting ride.

For additional graphs and information about the story presented above, click here.
For the press release that was issued by NASA on this, click here.

Jane Turner is an expert on active galactic nuclei, which concerns those galaxies such as quasars thought to contain an actively accreting supermassive black hole at their cores. She currently holds joint affiliations as a Research Associate Professor in the physics department at the University of Maryland, Baltimore County (UMBC), and as a research scientist at NASA Goddard Space Flight Center. At UMBC she teaches Extragalactic Astronomy and Cosmology and introductory astronomy. She first came to NASA Goddard in 1988 to study X-ray emission from active galaxies. Her work has entailed analysis of data from a large variety of X-ray instruments on U.S. satellites and from U.S. collaborative missions worldwide. Highlights include supporting the Broad Band X-ray Telescope (BBXRT) mission as timeline planner, when it flew on shuttle mission STS-35, and being awarded a five-year NASA research grant in 1997. With Dr. Kirpal Nandra she has constructed a large archive database of reduced spectra, images and light curves of ASCA observations of active galaxies, known as the TARTARUS project, freely available on the Internet at http://tartarus.gsfc.nasa.gov. Dr. Turner received her B.S. in Mathematics with Astronomy in 1984 and her Ph.D. in Astronomy in 1988, both from the University of Leicester in the United Kingdom. 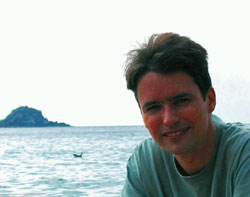 Lance Miller teaches physics and astrophysics at Oxford University. His research focuses on studying the largest-scale structures in the universe through the distribution of active galaxies and quasars, as well as the phenomenon of supermassive black hole accretion. Dr. Miller obtained his Ph.D. in astrophysics from Cambridge University in 1983 and also worked at the Royal Observatory Edinburgh and the University of Edinburgh before moving to Oxford in 1996.