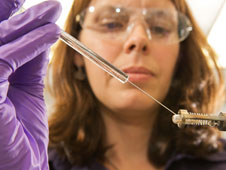 > Larger image
Goddard scientist Jennifer Eigenbrode injected a chemical into a rock sample and then heated the test tube to determine whether the sample-preparation method preserved the sample’s molecular structure. Her testing proved successful, ultimately leading to the experiment’s inclusion on the Sample Analysis at Mars instrument. Credit: Chris Gunn 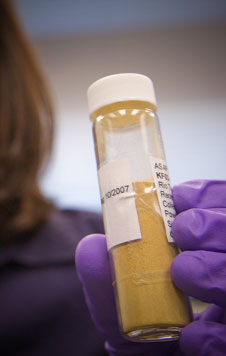 > Larger image
Scientist Jennifer Eigenbrode used a soil simulant — material that closely resembles material found on the martian surface — to test the effectiveness of a sample-preparation method that was added to the Sample Analysis at Mars instrument, one of 10 flying on the Mars Science Laboratory. Credit: Chris Gunn The quest to discover whether Mars ever hosted an environment friendly to microscopic forms of life has just gotten a shot in the arm.

"Mars was a lot different 3-1/2 billion years ago. It was more like Earth with liquid water," said Jennifer Eigenbrode, a scientist at the NASA Goddard Space Flight Center in Greenbelt, Md. "Maybe life existed back then. Maybe it has persisted, which is possible given the fact that we've found life in every extreme environment here on Earth. If life existed on Mars, maybe it adapted very much like life adapted here."

An experiment proposed by Eigenbrode has been added to the Sample Analysis at Mars (SAM) instrument on a mobile NASA laboratory that will land on Mars in 2012. Goddard scientists developed SAM. The newly added experiment will enhance SAM's ability to analyze large carbon molecules if the mission is fortunate enough to find any.

The mission, NASA's Mars Science Laboratory, will be checking whether a carefully chosen area of Mars has ever had an environment favorable for the development of life and preservation of evidence about life. The mission's car-sized rover will analyze dozens of samples scooped from soil and drilled from rocks.

None of the rover's 10 instruments is designed to identify past or present life, but SAM has a key role of checking for carbon-containing compounds that potentially can be ingredients or markers of life. Most environments on Mars may not have enabled preservation of these compounds, which are called organic molecules, but if any did, that could be evidence of conditions favorable for life.

Eigenbrode secured the flight opportunity for her experiment after successfully proving in a series of tests earlier this year that the combination of heat and a specific chemical would significantly enhance SAM's ability to analyze large carbon molecules.

In particular, Eigenbrode's experiment will provide far more details about the evolution of large organic molecules that are made up of smaller molecules such as carbohydrates, lipids, proteins, and nucleic acids — should SAM find them. "Our experiment preserves information on how these molecules formed," she said. "What we'll get are key observations that tell us about organic carbon sources and processing on Mars — shedding light on the planet's carbon cycle."

SAM is considered one of the most complicated instruments ever to land on the surface of another planet. Equipped with a gas chromatograph, a quadruple mass spectrometer, and a tunable laser spectrometer, SAM will carry out the initial search for organic compounds when the Mars Science Laboratory lands in 2012. To identify organic compounds, however, the instrument will have to prepare soil and rock samples before it can obtain measurements.

As planned, the rover's robotic arm will scoop up the soil and drill rock samples and a separate mechanism will deliver the samples to SAM's sample-manipulation system, a carousel-like device that contains two concentric rings holding 74 tiny tubes. Once the tubes are filled with the fine-grained samples, the carousel will rotate and insert the tube inside a pyrolysis oven. As the oven heats, the hermetically sealed sample will begin to break down, releasing gases that SAM's instrument will then analyze for potential biomarkers.

There is a catch, however. Although SAM will be effective at identifying organic compounds, heat breaks carbon bonds, resulting in fragmentation and the loss of molecular information. What was needed, Eigenbrode believed, were other ways to prep the samples to prevent fragmentation and obtain more details.

In her quest to find these techniques, Eigenbrode investigated methods that would give a robotic laboratory operating millions of miles from home the same flexibility and capability of an Earth-based organic geochemistry laboratory. "Sample preparation is the forgotten science in Mars exploration," Eigenbrode said. "An instrument is only as good as the sample, and there is no single method for identifying all molecular components."

In 2009, she tested rocks similar to those found on the red plant, prepping the sample with a small amount of tetramethylammonium hydroxide in methanol (TMAH), a chemical mixture used in laboratories for studying organic compounds. She then heated the sample to determine whether the TMAH not only preserved the sample's molecular structure, but also could survive the higher levels of radiation found on Mars. The testing proved successful.

The tests also proved that the addition of her experiment on SAM posed no technical challenges. Ten of the 74 carousel cups already were reserved for a "wet chemistry" experiment effective for analyzing free amino acids, the building blocks of proteins.

Seeing the benefit of adding Eigenbrode's sample-preparation method to the overall SAM mission, Principal Investigator Paul Mahaffy and scientists Daniel Glavin and Jason Dworkin agreed to donate two of the 10 cups for her experiment. Just a few weeks ago, the SAM team added and sealed the TMAH chemical inside the two cups.

"With the addition of Jennifer's chemical toolkit, the range of organic molecules that SAM can detect has been expanded with no hardware modifications. It provides a promising path to contribute to our understanding of the biological potential on MARS," Mahaffy said.

"When I began working on my concept in early 2009, I thought it might be suitable for a future Mars mission, perhaps in 2016," Eigenbrode said. "I never thought that it would fly so soon on SAM. I believe we have really enhanced the capabilities of SAM should it find organic material. What I really want now is to find macromolecules on Mars."