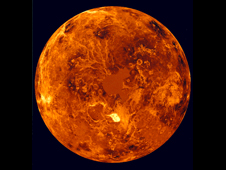 The SAGE mission would explore Venus. This is a false color global view of Venus northern hemisphere. Centered at the north pole, this image was made by mapping Magellan radar imaging on to a computer simulated globe. The color is based on Venera 13 and 14 Lander images, and gaps in Magellan coverage were filled in with Pioneer Venus Orbiter data. 0 degrees E longitude is about 6:00, 90 E at 3:00. Credit: NASA
› Larger image Two of the three proposals selected as candidates for the agency's next New Frontiers mission have the Goddard Space Flight Center playing a key role in the successful performance of the mission. This bodes well for Goddard's chances of eventually having a role in the next New Frontiers mission selected for flight.

Each proposal team initially will receive approximately $3.3 million in 2010 to conduct a 12-month mission concept study that focuses on implementation feasibility, cost, management and technical plans.

Out of the three proposals, NASA will select one proposal for full development after detailed mission concept studies are completed and reviewed. The studies begin during 2010, and the selected mission must be ready for launch no later than Dec. 30, 2018. Mission cost, excluding the launch vehicle, is limited to $650 million.

One of the proposals selected for study was the Origins Spectral Interpretation Resource Identification Security Regolith Explorer mission, also known as OSIRIS-REx. The OSIRIS-REx spacecraft would rendezvous and orbit a primitive asteroid. After extensive measurements, instruments would collect a pristine sample from the asteroid’s surface for return to Earth. The returned samples would help scientists better understand and answer long-held questions about the formation of our solar system and the origin of complex molecules necessary for life.

Goddard would provide overall mission management for OSIRIS-REx, working with the Principal Investigator, Dr. Michael Drake, Director of the Lunar and Planetary Laboratory at the University of Arizona, who leads the OSIRIS-REx team.

OSIRIS-REx brings together the University of Arizona’s leadership in planetary science, Goddard’s expertise in project management, systems engineering, instruments and safety and mission assurance, and Lockheed Martin’s extensive experience in sample-return mission development and operations. The OSIRIS-REx payload would include instruments provided by the University of Arizona, Goddard, Arizona State University, and the Canadian Space Agency.

The other New Frontiers mission selected for study that features a role for Goddard was the SAGE mission to Venus. SAGE stands for Surface and Atmosphere Geochemical Explorer. SAGE would release a probe to descend through the planet's atmosphere. During descent, instruments would conduct extensive measurements of the atmosphere's composition and obtain meteorological data. Upon reaching the surface of Venus, the probe would measure its composition and mineralogy. Larry Esposito of the University of Colorado in Boulder, is the principal investigator. Goddard scientists Dr. Paul Mahaffy and Dr. William Brinckerhoff are co-investigators for a Goddard-led instrument.

Mahaffy said, "Today’s Venus is a most inhospitable place with surface temperatures greater than 850 degrees Fahrenheit and pressures more than 90 times the pressure on the surface of the Earth. Goddard’s role on SAGE, should it be the finalist selected by NASA, will be to make some of the measurements that help us to understand why Venus is so different from Earth and if it was perhaps more habitable early in its history. The instrument provided by Goddard would measure the abundance of trace species such as sulfur dioxide, hydrogen sulfide, and water as the SAGE probe descends through the atmosphere to the surface. It would also make other measurements of inert gases such as helium, neon, argon, krypton, and xenon to help us solve the puzzle of the history of the atmosphere."

The third proposal selected was the Basin Sample Return Mission. That mission would place a lander in a broad basin near the moon's south pole and return approximately two pounds of lunar materials for study.

The proposals were submitted to NASA in July 2009, in response to the New Frontiers Program 2009 Announcement of Opportunity. New Frontiers seeks to explore the solar system with frequent, medium-class spacecraft missions that will conduct high-quality, focused scientific investigations designed to enhance understanding of the solar system.

The final selection will become the third mission in the program. New Horizons, NASA's first New Frontiers mission, launched in 2006, will fly by the Pluto-Charon system in 2014 then target another Kuiper Belt object for study. The second mission, called Juno, is designed to orbit Jupiter from pole to pole for the first time, conducting an in-depth study of the giant planet's atmosphere and interior. It is slated for launch in August 2011.