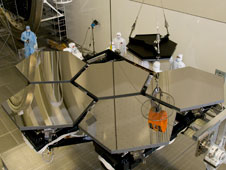 HUNTSVILLE, Ala. -- In ancient mythological times reflective surfaces like shiny metals and mirrors were thought to be magical and credited with the ability to look into the future. NASA is using mirrors to do just the opposite – look into the past.

Fast forward a couple of centuries from ancient time and myths to find NASA is developing a primary mirror, 21.3 feet in diameter, for use on the James Webb Space Telescope in a very different way -- to tell us about our beginning in the universe and how the first galaxies formed. The primary mirror will serve as the telescope's eye and peer through dusty clouds to see stars forming planetary systems, connecting the Milky Way to our own Solar System.

Handling delicate space hardware holds no superstitious myths for NASA, but it's still a delicate task that requires careful preparation. On Friday, Jan. 8, six of the 18 Webb telescope mirror segments will be moved into the X-ray and Cryogenic Facility, or XRCF, at NASA's Marshall Space Flight Center in Huntsville, Ala., to eventually experience temperatures dipping to a chilling -414 degrees Fahrenheit to ensure they can withstand the extreme space environments.

When the primary mirror is assembled in space, it will include three different shapes of mirror segments: 6 are "A" segments, 6 are "B" segments and 6 are "C" segments. This upcoming test in the XRCF will collect data from all three sizes – "A, B and C"-- a first for these in the cryogenic facility. This test will also include the engineering development unit, the first primary mirror segment of the Webb telescope that has met flight specifications at ambient temperatures.

"By the time testing in the XRCF concludes in 2011, all 18 flight segments will have been through multiple measurements while experiencing the extreme temperatures of space," said Helen J. Cole, James Webb Space Telescope Activities Project Manager at NASA Marshall. "This process has been six years in the making and we're excited that we can support the Webb telescope development with our world class cryogenic test facility."

"This is a tremendously important milestone to the Webb Telescope project that bodes well for both our future mirror manufacturing schedule and for the potential performance capabilities of the telescope," said Lee Feinberg, James Webb Space Telescope Optical Telescope Element Manager at NASA Goddard.

Northrop Grumman Corporation is leading the design and development effort for the space agency's Goddard Space Flight Center, Greenbelt, Md. Mirror manufacturing began six years ago, led by Northrop Grumman's principal optical contractor Ball Aerospace. Brush Wellman in Elmore, Ohio made twenty-one 500-lb. hexagonal mirror blanks from beryllium, an extremely strong, lightweight metal. Axsys Technologies in Cullman, Ala. machined the backside of the beryllium blanks and chemically etched them into an isogrid pattern that reduced mirror mass by 92 percent, from 250 kg to 21 kg (equivalent to 553 pounds and 46 pounds). The front side of the mirror blank was machined to prep the optical surface for high precision grinding, polishing and testing, which is being done by Tinsley. The mirror segments have undergone a series of polishing and cryogenic testing cycles. Ball incorporates the mirrors into optical assemblies, which are mounted on the telescope structure.

The James Webb Space Telescope is the next-generation premier space observatory, exploring deep space phenomena from distant galaxies to nearby planets and stars. Webb will give scientists clues about the formation of the universe and the evolution of our own solar system, from the first light after the Big Bang to the formation of star systems capable of supporting life on planets like Earth. Expected to launch in 2014, the telescope is a joint project of NASA, the European Space Agency and the Canadian Space Agency.

For more information about the mirror test, visit: http://www.nasa.gov/centers/marshall/news/jwst/index.html

For more information about the Webb telescope, visit:

For automatic e-mail subscriptions to Goddard press releases, send an electronic mail message to: majordomo@listserv.gsfc.nasa.gov. In the body of the message (not the subject line) type the words "subscribe gsfc_press_releases" (do not use quotation marks). The system will reply with a confirmation via e-mail of each subscription.

To remove your name from the list at any time, send an e-mail address to majordomo@listserv.gsfc.nasa.gov. In the body of the message (not the subject line), type "unsubscribe gsfc_press_releases".