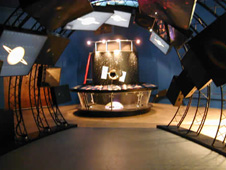 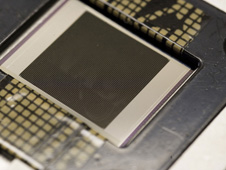 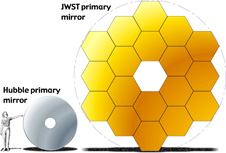 The exhibit will be open to the public for three months from Saturday, October 10. Showcasing dazzling deep-space discoveries of the world’s most powerful telescope, the exhibit will immerse visitors in the mystery and magnificence of the Hubble Space Telescope mission.

To celebrate the opening, some of NASA’s scientists and engineers working on the James Webb Space Telescope will be guest speakers at the Ocean Explorium during October. They will make presentations at a "Cosmic Voice" speaker series on Tuesday nights. Speakers include: Ray Lundquist, Webb Telescope Engineer and Tom Griffin, Hubble Space Telescope Observatory Manager are speaking at a private event. The general public can hear Amber Straughn, Webb Telescope scientist (October 13); and Mark Clampin, Webb Telescope scientist (October 27). During the "Cosmic Voice" speaker series a bus will shuttle visitors between the Ocean Explorium and the Astronomical Observatory at University of Massachusetts, Dartmouth.

"This is a real coup for the Ocean Explorium, and for the city of New Bedford," said Ocean Explorium executive director Mark Smith. "We are thrilled to have the caliber of these scientists and engineers coming here to share their knowledge and experience with the people of our community."

The 2,000 square-foot exhibit immerses visitors in the magnificence and mystery of the Hubble mission and introduces the James Webb Space Telescope. A scale model of the Hubble is the focal point of the installation. "Satellite" units incorporate hands-on activities about how the telescope works, and feature Hubble's contributions to the exploration of planets, stars, galaxies, and the universe.

The exhibit contains images and data taken by Hubble of planets, galaxies, black holes, and many other fascinating cosmic entities. The exhibit is comprised of backlit color images and numerous interactive displays. Using a computer, visitors will be able to "hit" Jupiter with a comet and attempt to put star clusters in order of age. Using an infrared camera, visitors can also learn about the different wavelengths of light by taking pictures of their hand in visible and infrared light.

Visitors will learn about the James Webb Space Telescope, the next-generation premier space observatory, exploring deep space phenomena from distant galaxies to nearby planets and stars. The Webb Telescope will give scientists clues about the formation of the universe and the evolution of our own solar system, from the first light after the Big Bang to the formation of star systems capable of supporting life on planets like Earth.

Through computer games, videos and displays, visitors will also be able to experience how the Webb telescope will work. Visitors will learn about the cutting-edge technology of the Webb telescope like one that will see the universe in infrared light. All the new technology will enable scientists to see far back in time to when galaxies first formed and make many scientific breakthroughs.

Several interactive games are also featured in the exhibit. You can step through distances in the universe with the "Cosmic Distance Scale"; and "Scope it Out!" teaches players about two different types of telescopes and shows how the Webb telescope is similar, yet different than other telescopes.

One display will offer a comparison between the Hubble and the Webb telescope. One eye-catching thing is the difference in the size of the mirrors on the Webb, versus the Hubble. Webb will have a much larger mirror, which means it will have excellent resolution. The completed primary mirror will be 6.6 meters (7.2 yards) in diameter, about 2.75 times larger than the Hubble's primary mirror, which is 2.4 meters (2.6 yards) in diameter.

Viewers will learn about the engineering challenges of the mission, such as folding the telescope up in the rocket for launch, and unfolding it once deployed in space. The exhibit is also available on-line at the Webb telescope web site.

The Hubble traveling exhibit was developed by the Space Telescope Science Institute and the Smithsonian Institution Traveling Exhibition Service. This traveling exhibition is available from the Hubble Project Office at NASA Goddard.

The Ocean Explorium is a public center for science education in downtown New Bedford -- a unique blend of aquarium, museum, science center and school. Its focal exhibit is Science on a Sphere -- a state-of-the-art global display system which shows Earth and the planets in 3-D, like viewing the planets from outer space. It also features a colorful collection of marine animal exhibits from around the world, and a children’s activity center. The Ocean Explorium is open to the public Thursdays through Sundays, on holidays and during school vacations.