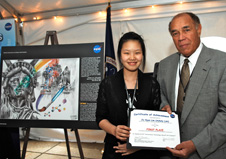 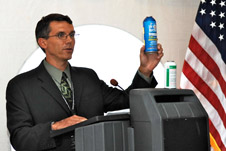 Greg Cole, of Mainstream Engineering Corporation, shows the crowd an example of the company’s QwikBoost refrigerant and lubricant product line, which employs a NASA technology based on a chemical/mechanical heat pump and helps customers save money while protecting the environment. Credit: NASA/Chris Gunn GREENBELT, Md. -- In honor of NASA’s Goddard Space Flight Center’s 50th anniversary, the Innovative Partnerships Program (IPP) Office hosted an evening event that commemorated Goddard research that has developed into spin-off technologies.

Attendees at the Goddard Visitor Center were presented information about how Goddard technologies have facilitated the creation of cordless tools, insulin pumps, survival kits, improve medical imaging and more. The Maryland Technology Development Corporation (TEDCO) recognized Goddard Space Flight Center with a resolution of appreciation for 50 years of "Scientific and Engineering Excellence in the State" of Maryland.

Representatives of highly successful products based on Goddard technologies benefiting the space industry and the U.S. economy spoke at the event. Former NASA Deputy Administrator and veteran shuttle astronaut Fred Gregory reminded attendees that innovation will remain key to NASA’s ability to research, invent and explore. “Those innovations developed for NASA programs have always led the way to technological advances that have strengthened our national economy,” Gregory said.

The oral time travel revealed 1960s technology for the original SPACE Blanket was developed into a life-saving product that can be found in emergency kits owned by thousands. According to Travis Smith of Grabber, Inc., this technology began as a plastic film originally used to improve the reflection of radio signals from NASA balloon satellites. Greg Moores told the story of how Black & Decker teamed with Goddard researchers to develop a drill Apollo astronauts used to collect the first lunar soil samples. Today this technology has led to a multi-billion-dollar cordless tool industry.

Representing technology from the 1980s, Steve Sabicer of Medtronic MiniMed, Inc., spoke about the company’s MiniMed insulin pump. The pump is based on NASA’s Programmable Implantable Medication System, or PIMS, and evolved from several NASA technologies, including one originally developed for life search experiments on Mars. “Originally developed for space research, the MiniMed pumps have been used in medical applications to dramatically improve the quality of life for thousands of patients here on Earth,” Sabicer said.

Benefiting the nation’s current "green" movement and developed in the '90s, QwikBoost refrigerant and lubricant helps customers save money while protecting the environment. Greg Cole of Mainstream Engineering Corporation said, “The QwikBoost additive was originally developed for NASA and is based on a chemical/mechanical heat pump that increases the performance of air conditioners, heat pumps, refrigerators and freezers.”

One of the latest products on the market using NASA technology is Bartron Medical Imaging. The Recursive Hierarchical Segmentation software system developed at Goddard enhances a digital medical image uncovering features in the image that are not visible to the naked eye. “The MedSeg device allows physicians to more quickly and more accurately diagnose diseases and other medical conditions,” Fitz Walker, of Bartron Medical Imaging, said.

Orlando Figueroa, Director of Applied Engineering and Technology at Goddard thanked those in attendance and the many who have contributed over the decades to improving life on Earth while exploring the unknowns of outer space.