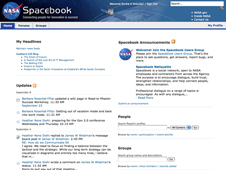 Spacebook, an internal expert networking site for NASA employees, allows new and established staff to get to know the agency’s diverse community of scientists, engineers, project managers and support personnel.

Spacebook was driven by a need to improve teamwork, communication and access to information across the agency’s diverse projects and centers.

“Using these tools lets you be sort of top-of-mind with a lot of these people so that when you need to call on them there’s already a connection,” said Emma Antunes Web Manager for Goddard Space Flight Center, and the project manager responsible for developing the agency’s Inside NASA intranet and the Spacebook utility.

NASA staffers span four generations, with the largest age bracket in the 40- to 60-year range; the average employee is 49 years old. Here at NASA Goddard, these employees collectively work on 40 to 50 flight projects that are currently underway from design all the way to collecting and processing data to understand our home planet and the universe we live in.

Networking isn’t something new that comes with the Spacebook technology, Antunes said. “At NASA we communicate with experts across many teams and organizations.”

The success of a mission or project largely depends on the social cohesiveness of team members, as well as the broader network of colleagues each individual can call upon to help solve problems.

Space doesn’t explore itself. Science doesn’t discover itself. People do that, and to do that they have to talk. They have to trade questions and ideas. They have to connect. And, the more diverse the group, the more likely connections and conversations will lead to new ideas and innovation. Spacebook will enhance NASA’s capacity to do just that.

“Spacebook’s not an expert locator,” Antunes said. “The idea is to allow expertise to bubble up to the top, because it’s participatory, rather than to put people out there.” Karl Hille
NASA's Goddard Space Flight Center
› Back To Top