Grow Text SizeShrink Text Size
A Long Night Falls Over Saturn's Rings
As Saturn's rings orbit the planet, a section is typically in the planet's shadow, experiencing a brief night lasting from 6 to 14 hours. However, once approximately every 15 years, night falls over the entire visible ring system for about four days.

This happens during Saturn's equinox, when the sun is directly over Saturn's equator. At this time, the rings, which also orbit directly over the planet's equator, appear edge-on to the sun. During equinox, light from the sun hits the ring particles at very low angles, accenting their topography and giving us a three-dimensional view of the rings.

Seen from our planet, the view of Saturn's rings during equinox is extremely foreshortened and limited. But in orbit around Saturn, Cassini had no such problems. From 20 degrees above the ring plane, Cassini's wide angle camera shot 75 exposures in succession for this mosaic showing Saturn, its rings and a few of its moons Aug. 12, 2009, beginning about 1.25 days after exact Saturn equinox, when the sun's disk was exactly overhead at the planet's equator. Credit: NASA/JPL/Space Science Institute
Print-resolution copy
"The equinox is a very special geometry, where the sun is turned off as far as the rings themselves are concerned, and all energy comes from Saturn," said Dr. Michael Flasar of NASA's Goddard Space Flight Center in Greenbelt, Md.

During Saturn's latest equinox August 11, the rings reached a temperature of 382 degrees below zero Fahrenheit, the coldest yet observed, as seen by the Composite Infrared Spectrometer (CIRS) instrument on board the Cassini spacecraft in orbit around Saturn. CIRS was developed at NASA Goddard, and Flasar is the Principal Investigator for the instrument.

"The whole point of the CIRS observations of Saturn’s rings, other than producing some cool pictures, is to learn something about the physical properties of the ring particles: their spin rates, how sluggish they are in storing and radiating heat (a diagnostic of size and composition), and their vertical distribution in the ring 'plane'," said Flasar.

Although the rings are thousands of miles wide, they are only about 30 feet thick. They are made of particles that are mostly water-ice. Scientists continue to debate the rings' origin and age. Some think they could be remnants of a shattered moon or captured comets, while others think they could have formed along with Saturn from the primordial disk of gas and dust that gave birth to our solar system.

"At first glance, Saturn's rings look broad and bland, but then we got close-up images from the Voyager flybys, and our reaction was: oh, my gosh, there's structure everywhere – what's going on?" said Dr. Linda Spilker, of NASA's Jet Propulsion Laboratory (JPL), Pasadena, Calif. 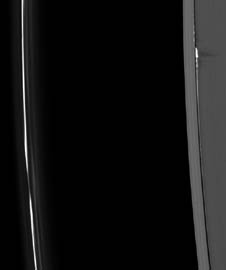 Ring material pulled to spectacular heights above the ring plane by the gravity of the moon Daphnis casts long shadows on Saturn's A ring in this Cassini image taken about a month before the planet's August 2009 equinox. The shadows in this image have lengths as long as 500 kilometers (310 miles), meaning the structures casting the shadows reach heights of almost 4 kilometers (2.5 miles) above the ring plane. Daphnis (8 kilometers, or 5 miles, across) is a bright dot in the Keeler Gap of the A ring on the right of the image. Its gravitational pull perturbs the orbits of the particles of the A ring forming the Keeler Gap's edge and sculpts the edge into waves. Material on the inner edge of the gap orbits faster than the moon so that the waves there lead the moon in its orbit. Material on the outer edge moves slower than the moon, so waves there trail the moon. The thin F ring on the left of the image shows the perturbations caused by the moon Prometheus. Credit: NASA/JPL/Space Science Institute

Researchers have discovered that while most of the ring particles are as small as dust and pebbles, there are a few chunks as big as mountains, and even some small moons several miles across embedded in the rings. Instead of orderly orbiting around Saturn, the particles clump together and drift apart, and the rings ripple and warp under the gravitational influence of Saturn's swarm of more than 60 moons.

"The closer we look at the rings, the more complex they get," says Spilker, Deputy Project Scientist for the CASSINI mission and a Co-Investigator on CIRS. She is leading the instrument team's investigation of the rings.

"Because Saturn’s rings are so extended, going out to more than twice Saturn’s radius (from the cloud tops), the furthest rings get less heat from Saturn than the innermost rings, so the ring temperatures at equinox tend to fall off with distance from Saturn’s center," said Flasar.

However, the CIRS team discovered that the A-ring – the outermost of the wide, bright rings – did not cool off as much as expected during the equinox. This might give clues about its structure and evolution. "One possibility is that the gravitational influence of moons outside the A-ring is stirring up waves in it," said Spilker. "These waves could be much higher than the typical thickness of the rings. Since the waves rise above the ring plane, material in the waves would still be exposed to sunlight during the equinox, which would warm up the A-ring more than expected."

"But we have to carefully test this idea with computer models to see if it produces the temperatures we observed with CIRS," adds Spilker. "That's the challenge with CIRS. It's not like seeing a close-up picture of Mars, which can tell you something about its geology right away. We have to look at the CIRS data from different times and sun angles to see how the ring temperatures are changing, then make computer models to test our theories on what those temperatures say about the rings."

The effort to understand the rings could help us understand our origin. "Our solar system formed from a dusty disk, so by understanding the dynamics in a disk like Saturn's rings, we can gain insight into how Earth and the other planets in our solar system were made," said Spilker.

The equators of both Earth and Saturn are tilted compared to their orbit around the sun. This tilt makes the sun appear to rise higher and lower in the sky throughout the year as Earth progresses in its orbit, causing the seasons to change. Likewise, Saturn's tilt makes the sun appear higher and lower in the sky as Saturn moves in its orbit, which takes about 29.5 years to complete.

Saturn experiences two equinoxes per orbit, just as Earth does, when the planet's equator lines up edge-on to its orbital plane, causing the sun to appear directly over the equator. For a viewer on Saturn, the sun would seem to move from south to north around the time of the August 11 equinox.

Technically, the equinox is the instant when the sun appears directly over the equator, but Saturn's situation gives the rings an extended twilight. Saturn is about 10 times farther from the sun than Earth. Since Saturn is farther from the Sun's gravitational pull, it moves relatively slowly in its orbit compared to Earth, which makes it take longer for the sun to noticeably appear higher or lower in the sky. Also, even as far away as Saturn, the sun is large enough to appear as a disk, not a point, according to Spilker.

So, before the August 11 equinox, a viewer embedded in Saturn's rings would have seen sunlight fade as the top edge of the solar disk appeared to touch the rings first. This would be followed by darkness around the equinox as the solar disk slowly crossed the ring plane. Full sunlight would have returned when the sun's bottom edge rose above the ring plane, about four days from when the sunlight first began to fade.

The Cassini-Huygens mission is a cooperative project among NASA and the European and Italian Space Agencies. NASA JPL manages the mission for the Science Mission Directorate at NASA Headquarters in Washington. JPL also designed, developed and assembled the Cassini orbiter and its two onboard cameras. The imaging team is based at the Space Science Institute, Boulder, Colo. The CIRS team is based at NASA Goddard. CIRS was built by Goddard, with significant hardware contributions from England and France.