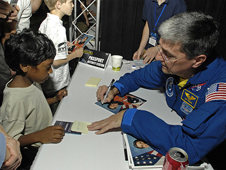 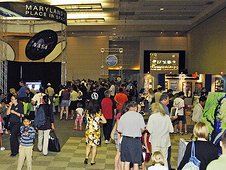 A crowd in one of the exhibition areas at the "Maryland's Place in Space" event. Credit: NASA/Bill Hrybyk
› More images from Flickr Thousands streamed into the Baltimore Convention Center on Saturday, May 30 for Maryland’s Place in Space, a free expo showcasing the state's innovative work in space and technology. NASA’s Goddard Space Flight Center and the Johns Hopkins University Applied Physics Laboratory (APL) hosted the event that featured exciting robotics competitions, educational and fun activities and exhibits, captivating special guests, and much more.

"Maryland's Place in Space provided Goddard an opportunity to reach out to a previously untapped audience in the central Maryland area," said Michelle Jones, event lead from the Office of Public Affairs. "It also served as a great outlet for Goddard to come together with our partners and get the word out about what we do and how much Maryland contributes to space exploration."

The expo blanketed 20,000 square feet of the convention center with over 100 exhibits and activities. The exhibits were organized into interactive, informative themes or “pods.”

The exploration pod inspired all ages with space exploration and science activities. Critical missions in Earth science, heliophysics, planetary exploration, and astrophysics were featured including the Lunar Reconnaissance Orbiter, the Hubble Space Telescope, and the Fermi Space Telescope.

The green pod prompted discovery of Earth Science research and Maryland’s contributions to better understanding our changing planet. Families learned through musical meteorology from Stormin’ Bob Swanson and many other interactive exhibits from local organizations.

"Maryland's Place in Space was great," said Colette Lepage, Spacecraft Systems Development and Integration Facility Operations Manager and exhibitor in the technology pod. "It sounds redundant, but I believe it has increased the awareness of Maryland's place in space. I don't think people realize how much we contribute, especially in earth science. With the climate changing, polar ice caps melting, more than ever, it's time to show what we do and how we are working to make a difference. The event was very à propos. I hope we continue to have similar events each year."

The people pod highlighted Maryland’s extraordinary jobs in science and technology. The main stage featured presentations by NASA astronauts and special appearances by the Tuskegee Airman and Disney's Wall*E.

"Maryland's Place in Space went really well; I was most impressed by the number of people that attended," said Leigh Janes, Aerospace Engineer and one of the event’s leads for organizing the exhibits. "When we were choosing Goddard activities for the event, we considered the limited amount of space and looked for exhibits that not only show the cool stuff that we work on, but also why it's important and how it affects us every day. I think kids, especially, walked away knowing more about what they can do."

In addition to a packed ballroom of activities, the expo included a full-scale FIRST (For Inspiration and Recognition of Science and Technology) Robotics Competition. Throughout the day, 16 teams from Maryland high schools showed off the complex robots that they built for the 2009 regional and national competitions.

"It was amazing to have the 16 Maryland high school teams pull together for Maryland's Place in Space," said Rob Thate, program manager for FIRST Robotics at Goddard. "Our goal through the robotics competitions is to have everyone, whether they are a student or an adult, walk away with sense of understanding that they have so much potential within them and that they can affect the future of our country. There is such inspiration when kids make the connection between dry textbook material and real world application. Robotics does this. It's a mystery, but it works."

Maryland’s Place in Space revealed the tremendous impact and leadership that organizations such as NASA Goddard, Johns Hopkins Applied Physics Lab, Space Telescope Science Institute, National Oceanic Atmospheric Administration, and the University of Maryland, as well as their industry partners have in the aerospace industry.