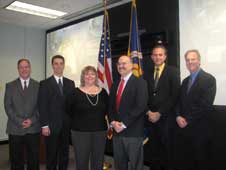 > View larger image
Paul and Ellen Roberts (center) are flanked by award winners (left to right) Perry Wagner, Chip McCann, Mike Kirsch, and Jeff Stewart at Wednesday’s ceremony. Credit: NASA/Denise Lineberry Four men stood in an upstairs conference room Wednesday, each getting a medal from Lori Garver, NASA’s Deputy Administrator. She reminded everyone that NASA’s products were produced by NASA’s people. “I am just so thrilled that you all were there,” she told the foursome getting the awards.

A fifth told the gathering in the headquarters building at NASA’s Langley Research Center that he had already gotten his award. “Thanks guys,” said Paul Roberts, looking at his NASA Engineering and Safety coworkers, “for giving me back my life.”

There was a November 4 meeting in Langley’s Building 1256, where the team was getting ready for a module test.

“We were sort of sitting back, looking at data, and suddenly he (Roberts) had his head back and it sounded like he was snoring,” Perry Wagner remembered. “We were sort of kidding him that it looked like the meeting was boring him, but he didn’t respond.”

Jeff Stewart shook Roberts and, finding no response, laid him on the floor. Wagner, Stewart, and Chip McCann immediately began administering CPR, as best they could remember how.

“I think I’d had the training most recently,” McCann said, “and that was about six years ago.”

Wagner said, “I remember, like all of us, that we breathed on a mannequin in grade school. That was the last time.”

Stewart was more specific about his training, “About 34 years ago, when I was in the Boy Scouts.”

But each took a role: Stewart working on Roberts’ chest, Wagner doing mouth-to-mouth resuscitation when Roberts began to turn blue, and McCann monitoring Roberts for a pulse rate.

“As soon as we put him down and tried to find a pulse on his wrist―and actually I thought I felt a faint pulse there―Jeff put his hand on Paul’s chest and said ‘I don’t feel his heart beating here,’” McCann said. “By then, I didn’t feel anything on his wrist, and that was the time Jeff started doing the compression.”

“It was a struggle for all of us,” said McCann. “We were trying to do the basics.”

Mike Kirsch was organizing everyone else, creating an impromptu emergency center, calling 911, getting furniture out of the way for the arrival of paramedics, and trying to reach NASA Engineering and Safety Center Director Ralph Roe in an effort to find the phone number for Roberts’ wife.

Stewart remembered an e-mail from his father-in-law a week earlier advising that the old “five compressions” method of CPR had been superseded by a recommended “30 compressions.”

Wagner asked Stewart whether mouth-to-mouth was required, and finally Stewart said okay. “It’s better to do it than not to do it,” Wagner said. “I think I remember his (Roberts) color getting better.”

Stewart said, “Two to three minutes after we started to work on him, it looked like he was trying to come around. It kind of gave us impetus to keep going. It was, ‘Wow, he’s trying. We’ve got to keep going.’

“I had been taught that you had to press hard, almost to break his ribs, but I didn’t want to break his ribs. That was why our communication was so important. As long as I got feedback from Chip that we were giving enough blood to him, I could keep going the way we were.”

Within 10 minutes, emergency personnel arrived to take over. First, they told Stewart to continue chest compression “The first thing they said was ‘Are you tired? Can you keep going?’”

Then the paramedics used a defibrillator to shock Roberts’ heart. “By the way, that wasn’t much fun,” said Roberts, laughing. One shock brought him back.

“Then Paul started talking,” Stewart said. “He said ‘Why am I on the floor? What happened?’”

Stewart filled him in on the ambulance ride to a local hospital, where a pacemaker was implanted. The diagnosis was that Roberts had not had a heart attack, but that his electrical system had shut down. Without the CPR administered by his co-workers, Roberts probably would have died.

“Let me give you an idea of how important what these guys did was,” Roberts said. “When I was in the hospital, I looked up some statistics on the Internet. When you go into sudden cardiac arrest and you have somebody in the room who sees you go down, the percentages are about 4-7 percent that you survive.

“About 30 percent of that 4-7 percent have almost no mental degradation. I think I’m in that 30 percent.” He laughed with everyone around him.

For Roberts, though, it was all personal. “Guys, thanks for giving me back my family,” he said.

Sitting at a table nearby, wife Ellen nodded her thanks, on behalf of their daughters Katherine, Carolyn, and Elizabeth. All of the men who received the awards made early New Year’s resolutions. “CPR training is on my list,” Kirsch said.