Grow Text SizeShrink Text Size
Lotus Plant-Inspired Dust-Busting Shield to Protect Space Gear
A plant that lives along muddy waterways in Asia has inspired a NASA team to develop a special coating to prevent dirt and even bacteria from sticking to and contaminating the surfaces of spaceflight gear. 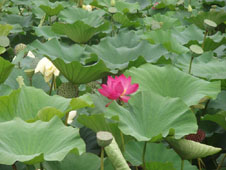 The lotus plant has inspired materials engineers to create a coating that mimics the plant’s unusual self-cleaning capabilities. Goddard engineer Wanda Peters is investigating whether materials treated with these coatings could survive the harsh space environment. Credit: Flickr Creative Commons / Liangjinjian
Print-resolution copy
Researchers at NASA's Goddard Space Flight Center in Greenbelt, Md., are developing a transparent coating that prevents dirt from sticking in the same way a lotus plant sheds water — work begun through collaboration with Northrop Grumman Electronics Systems, Linthicum, Md., and nGimat Corporation, Atlanta, Ga. Although a lotus leaf appears smooth, under a microscope, its surface contains innumerable tiny spikes that greatly reduce the area on which water and dirt can attach.

"If you splash lotus leaves with water, it just beads up and rolls off, indicating they have a special hydrophobic or water-repelling ability," said Eve Wooldridge, the James Webb Space Telescope (JWST) Project Contamination and Coatings Lead at Goddard. "This ability also prevents dust from adhering to the leaves."

This special quality is what the NASA team is attempting to replicate to prevent dirt from accumulating on the surfaces of spacesuits, scientific instruments, robotic rovers, solar array panels and other hardware used to gather scientific data or carry out exploratory activities on other objects in the solar system.

The trick is developing a coating that can withstand the harsh space environment.

The coating was originally developed to reduce the need for window cleaning. Made from silica, zinc oxide, and other oxides, its potential uses on Earth are limitless. It could be applied to car windshields, camera lenses, and eyeglasses — almost anywhere a need exists to repel dirt. Understanding the potential, Northrop Grumman teamed with nGimat to find more applications for the coating technology. The pair ultimately turned to Goddard for its expertise in making equipment ready to endure the harsh space environment.

"Indeed, the ability to replicate these properties could prove invaluable to NASA," said Wanda Peters, Principal Investigator for NASA's lotus coating research and Lead of Goddard’s Coatings Engineering Group. During the Apollo moonwalks, for example, such a technology could have prevented the highly abrasive lunar dust from adhering to astronauts’ spacesuits: 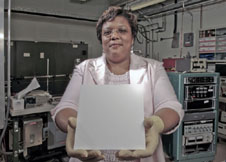 Wanda Peters holds some material with the lotus coating on it. Credit: NASA
Print-resolution copy
"I think one of the most aggravating, restricting facets of lunar surface exploration is the dust and its adherence to everything no matter what kind of material, whether it be skin, suit material, metal, no matter what it be and its restrictive, friction-like action to everything it gets on," said Apollo 17 Commander Eugene Cernan during the Apollo 17 Technical Crew Debriefing.

"However, the coating as it was originally formulated will not be able to withstand the harsh environmental conditions found in space," Peters said.

The Goddard team has experimented with and tested different formulas to determine their suitability for spaceflight. "No one formula will meet all our needs," added Peters. "For example, the coating that's applied to spacesuits needs to stick to a flexible surface, while a coating developed to protect moving parts needs to be exceptionally durable to resist wear and tear."

The Goddard team has met with exploration systems engineers at NASA's Johnson Spaceflight Center, Houston, Texas, to demonstrate the modified coatings and get mission requirements. Besides spacesuits and moving parts, it could be applied to solar panels and radiators, where cleanliness keeps them operating at their maximum potential.

The team also is trying to partner with Northrop Grumman to add a biocide to the coating, which would kill bacteria that thrive and produce foul odors wherever people are confined to a small space for long periods, like the space station. NASA could apply the same biocide-infused coating on a planetary lander to prevent Earth-borne bacteria from adhering and potentially contaminating the surface of an extraterrestrial object. The team believes this version of the coating may have commercial interest to hospitals as well.

"We are modifying and testing the formula to ensure it can withstand all the challenges our hardware will encounter — extreme temperatures, ultraviolet radiation, solar wind, and electrostatic charging. Outgassing of the coating also must be addressed for use inside astronauts' habitation areas," Peters added. "We also are making sure it remains durable and cleanable in the space environment."

"We have a great team," said Peters. "Goddard is the only NASA center researching this type of coating, and we believe continued research will deliver great benefits to NASA's exploration missions and will produce many positive applications outside NASA."

This research is also supported by the Exploration Technology Development Program’s Dust Management Project, led and managed by NASA’s Glenn Research Center, Cleveland, and is one of several technologies being assessed and developed by this project for application to space exploration missions.