Grow Text SizeShrink Text Size
NASA Scientists Find Clues to a Secret of Life
NASA scientists analyzing the dust of meteorites have discovered new clues to a long-standing mystery about how life works on its most basic, molecular level.

"We found more support for the idea that biological molecules, like amino acids, created in space and brought to Earth by meteorite impacts help explain why life is left-handed," said Dr. Daniel Glavin of NASA's Goddard Space Flight Center in Greenbelt, Md. "By that I mean why all known life uses only left-handed versions of amino acids to build proteins." Glavin is lead author of a paper on this research appearing in the Proceedings of the National Academy of Sciences March 16. 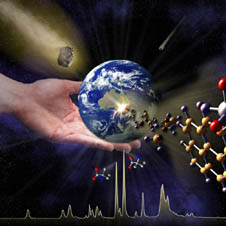 This is an artist's concept of asteroids delivering amino acids to Earth. The jagged white line at the bottom of the image is the actual data from the analysis of the Murchison meteorite. The two largest peaks are the amounts of right-handed and left-handed versions of the amino acid isovaline. Note that the highest of these two peaks is the amount of left-handed isovaline, revealing an excess of the left-handed variety in the meteorite. Credit: NASA/Mary Pat Hrybyk-Keith
Print-resolution copy
Proteins are the workhorse molecules of life, used in everything from structures like hair to enzymes, the catalysts that speed up or regulate chemical reactions. Just as the 26 letters of the alphabet are arranged in limitless combinations to make words, life uses 20 different amino acids in a huge variety of arrangements to build millions of different proteins. Amino acid molecules can be built in two ways that are mirror images of each other, like your hands. Although life based on right-handed amino acids would presumably work fine, "you can't mix them," says Dr. Jason Dworkin of NASA Goddard, co-author of the study. "If you do, life turns to something resembling scrambled eggs -- it's a mess. Since life doesn't work with a mixture of left-handed and right-handed amino acids, the mystery is: how did life decide -- what made life choose left-handed amino acids over right-handed ones?"

Over the last four years, the team carefully analyzed samples of meteorites with an abundance of carbon, called carbonaceous chondrites. The researchers looked for the amino acid isovaline and discovered that three types of carbonaceous meteorites had more of the left-handed version than the right-handed variety – as much as a record 18 percent more in the often-studied Murchison meteorite. "Finding more left-handed isovaline in a variety of meteorites supports the theory that amino acids brought to the early Earth by asteroids and comets contributed to the origin of only left-handed based protein life on Earth," said Glavin.

All amino acids can switch from left-handed to right, or the reverse, by chemical reactions energized with radiation or temperature, according to the team. The scientists looked for isovaline because it has the ability to preserve its handedness for billions of years, and it is extremely rarely used by life, so its presence in meteorites is unlikely to be from contamination by terrestrial life. "The meteorites we studied are from before Earth formed, over 4.5 billion years ago," said Glavin. "We believe the same process that created extra left-handed isovaline would have created more left-handed versions of the other amino acids found in these meteorites, but the bias toward left-handed versions has been mostly erased after all this time."

The team's discovery validates and extends the research first reported a decade ago by Drs. John Cronin and Sandra Pizzarello of Arizona State University, who were first to discover excess isovaline in the Murchison meteorite, believed to be a piece of an asteroid. "We used a different technique to find the excess, and discovered it for the first time in the Orgueil meteorite, which belongs to another meteorite group believed to be from an extinct comet," said Glavin. 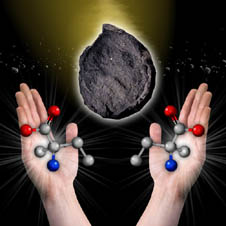 This artist's concept uses hands to illustrate the left and right-handed versions of the amino acid isovaline. Credit: NASA/Mary Pat Hrybyk-Keith
Print-resolution copy
The team also found a pattern to the excess. Different types of meteorites had different amounts of water, as determined by the clays and water-bearing minerals found in the meteorites. The team discovered meteorites with more water also had greater amounts of left-handed isovaline. "This gives us a hint that the creation of extra left-handed amino acids had something to do with alteration by water," said Dworkin. "Since there are many ways to make extra left-handed amino acids, this discovery considerably narrows down the search."

If the bias toward left-handedness originated in space, it makes the search for extraterrestrial life in our solar system more difficult, while also making its origin a bit more likely, according to the team. "If we find life anywhere else in our solar system, it will probably be microscopic, since microbes can survive in extreme environments," said Dworkin. "One of the biggest problems in determining if microscopic life is truly extra-terrestrial is making sure the sample wasn't contaminated by microbes brought from Earth. If we find the life is based on right-handed amino acids, then we know for sure it isn't from Earth. However, if the bias toward left-handed amino acids began in space, it likely extends across the solar system, so any life we may find on Mars, for example, will also be left-handed. On the other hand, if there is a mechanism to choose handedness before life emerges, it is one less problem prebiotic chemistry has to solve before making life. If it was solved for Earth, it probably has been solved for the other places in our solar system where the recipe for life might exist, such as beneath the surface of Mars, or in potential oceans under the icy crust of Europa and Enceladus, or on Titan."