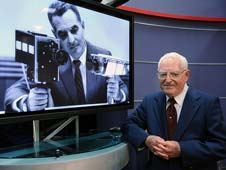 > Print resolution version (5 Mb)
Stan Lebar next to an image of him with the lunar camera. Credit: NASA/Goddard/Debbie McCallum Stan Lebar, who led the Westinghouse Electric Corporation team that developed the lunar camera that brought the televised news images of Neil Armstrong stepping onto the moon to more than 500 million people on earth, died on Wednesday, Dec. 23, 2009.

During his long and distinguished career, other camera programs he managed for NASA included the Apollo Color TV Cameras, the Skylab series of TV cameras, and the TV cameras for the Apollo-Soyuz Test Program (ASTP).

From 1943 until the end of World War II, Lebar served in the Pacific Theater of Operations as an Air Force B-24 Ball Turret Gunner. After the war, he attended the University of Missouri and received a BS in Electrical Engineering in 1950. He joined Westinghouse Electric Corporation in 1953, and worked in the Aerospace Division, Baltimore, Maryland, until his retirement in 1986.