Grow Text SizeShrink Text Size
NASA Launches Virtual Trip to Jupiter
NASA invites the public to travel to Jupiter from the comfort of one of 38 Science On a Sphere theaters around the globe. Viewers will feel like they are in orbit around the largest planet in our solar system as images based on data from NASA missions are projected onto a 6-foot sphere in the center of the theater. 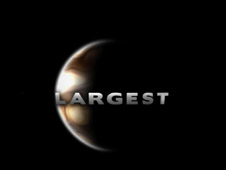 The logo for LARGEST Credit: NASA

Called "LARGEST", the free, seven-minute presentation opens September 15. "The movie has incredible visual appeal," said astrophysicist Amy Simon-Miller of NASA's Goddard Space Flight Center in Greenbelt, Md., who was a scientific consultant for the production. "We think it will engage people and get them interested in learning more about Jupiter and planetary exploration."

On September 24, the NASA Goddard Visitor Center will hold a public lecture on this new movie. Dr. Amy Simon-Miller, Chief Planetary Systems Laboratory at Goddard will provide details on Jupiter’s active environment and data collection. Michael Starobin, Goddard's Senior Producer and the film's director, will discuss the creative process and technical challenges for making a movie on a sphere. Registration is required to attend the event.

The film is based on data from NASA's robotic missions to the outer solar system, including Voyager, Galileo, and Cassini, as well as Hubble Space Telescope observations. Watching the movie sends viewers on a journey stretching more than five times the Earth-Sun distance. Jupiter is a "gas giant" -- more than 11 times wider than Earth -- with a small core forever shrouded beneath a cloak of toxic, roiling clouds and oceans of liquid metallic hydrogen tens of thousands of miles deep.

Viewers will be treated to up-close-and-personal encounters of the Great Red Spot, a storm larger than Earth that's been raging for hundreds of years. They'll also experience dramatic fireballs with up to six million megatons of explosive power from the impacts of doomed comet Shoemaker-Levy 9, which left planet-sized "bruises" of soot hanging for months in the Jovian atmosphere.

As virtual astronauts, visitors will also explore Jupiter's swirling mini-solar system of more than 60 moons, including tormented Io, which gushes fountains of molten sulfur over a hundred miles high, and fractured Europa, which may harbor oceans of liquid water, and possibly life, beneath its cracked, icy crust.

Science On a Sphere is an exciting new projection technology developed by the National Oceanic and Atmospheric Administration (NOAA). "LARGEST" is the latest in a series of films for the Sphere created by the team at NASA Goddard using new techniques and technology of their own, designed specifically for making spherical movies. In fact, LARGEST pushed the team to develop several new presentation techniques, demonstrated throughout the film. Goddard released the world's first major spherical film in 2006 called "FOOTPRINTS".

"Jupiter is not only a perfect subject for the Sphere, but also simply a great subject for a movie," said Senior Producer Michael Starobin of Honeywell Technology Solutions, Inc., Columbia, Md. "It presents itself as a regal, mighty character, and we tried hard to invest its cinematic depiction with as much commanding grandeur as possible. This is a movie that takes viewers somewhere way out of the ordinary. It brings abstract ideas to vibrant life and makes the fifth planet real in fresh, unexpected ways. This was a thrilling project to develop." Starobin wrote, produced, and directed the film.

To find the nearest Science on a Sphere theater, and for more images and information about Jupiter, refer to:

To register for the September 24 lecture, visit: