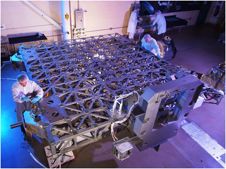 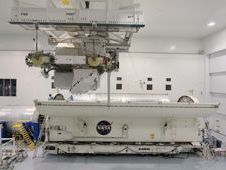 In the Space Station Processing Facility at NASA's Kennedy Space Center in Florida, workers position the ExPRESS Logistics Carrier-2, or ELC-2, over a transportation canister where it will be secured for its trip to Launch Pad 39A. Once at the pad, it will be installed in the payload bay of Space Shuttle Atlantis Credit: NASA/Goddard/Orbital Sciences Corporation
› Larger image
In a partnership that exemplifies the One NASA theme, Goddard Space Flight Center engineers teamed up with the External Payloads Group at Johnson Space Center and the ISS Payload Ground Processing support team at Kennedy Space Center to create the ExPRESS Logistics Carrier (ELC) Project.

The ELC is an un-pressurized attached payload project for the International Space Station (ISS) that provides mechanical mounting surfaces, electrical power, and command and data handling services for science experiments on the ISS. ("ExPRESS" stands for Expedite the Processing of Experiments to the Space Station.)

Based at Goddard, this newly formed project designed, built and tested five unpressurized aluminum carriers and six avionics packages for bringing spare hardware and science to the ISS.

The ELCs have a deck size of about 14 feet by 16 feet and spans the width of the space shuttle’s payload bay. Each one is capable of providing scientists with a platform and infrastructure to deploy experiments in the vacuum of space without requiring a separate dedicated Earth-orbiting satellite. Each carrier is also capable of carrying 10,000 lbs. to orbit and will also serve as parking fixtures for spare ISS hardware which can be retrieved when needed.

It took more than 100 engineers from Goddard, Johnson, Marshall and Kennedy Space Centers working together over a three-year period to complete this multi-million dollar project.

“Prior to Goddard’s involvement, Brazil’s efforts to design the avionics for the combined carrier proved too costly and bulky to implement,” said ELC Project Manager Kevin Carmack at Goddard. “Our experts solved the avionics issue by incorporating new technology including high data rate processing into the solution.”

Engineers from the Hubble Space Telescope (HST) Carriers Development Office at Goddard formed a large segment of this new organization, developing the unique ELC design, which incorporates elements of both types of science and spare hardware pallets. The mechanical challenge was to create the most efficient aluminum design ever flown in order to optimize the payload capability of the structure. The large platform needed to be extremely flat and the 250 holes had to be precisely drilled to allow engineers at KSC to integrate heavy payloads. Due of its prior expertise in building the cargo carriers for Hubble Space Telescope servicing missions, Goddard served as the overall designer, integrator and manufacturer for the ELCs.

Adhering to an aggressive delivery schedule due to the pending shut down of the Shuttle program in 2010, engineers from Goddard and Johnson started design activities in early 2006. But as work on the ELC began, the integrated team quickly found themselves tackling a host of other challenges such as cultural barriers, which included differences in design philosophy, test programs, quality oversight and methods of systems verification.

The distance between Centers and across time zones also proved challenging when scheduling meetings and communicating issues or ideas. Foreign ISS customers, particularly Russia and Germany, presented language barriers as well as distance issues. According to Carmack, the Goddard ELC team viewed these issues as an opportunity to expand relationships, forging stronger partnerships in the process.

The Center’s contributions seamlessly interfaced with Johnson’s government-furnished equipment for Shuttle and ISS electrical interfaces, structural grappling, and test facilities such as the Neutral Buoyancy Lab and Kennedy’s mechanical ground support equipment for ground handling and launch site integration of the payloads and experiments. Goddard also worked very closely with Marshall Space Flight Center for implementation of their software development and pre-launch verification and checkout.

Furthering NASA’s Goals
Goddard’s ELC Project demonstrates the One NASA theme of making decisions for the common good through its inclusive, participatory philosophy.

By distributing work among the core competencies of each Center, the ELC Project exemplified how NASA Centers can effectively work together, particularly in the areas of systems engineering, safety, on-orbit operations, reliability and project management.