Grow Text SizeShrink Text Size
NASA Goddard to Purge Rocket-Bursting Bubbles on Ares-1
Of all the things that can bring down a rocket, bubbles seem the most unlikely. They are a threat to rockets that use very cold liquid fuels, like the upper stage of NASA's new Ares 1 rocket, which will carry astronauts to the space station and join up in orbit with spacecraft carried by the larger Ares 5 rocket for missions to the moon and beyond. Bubbles can form when frigid liquid hydrogen and oxygen fuel are pumped into a rocket engine. The problem arises when they pop. 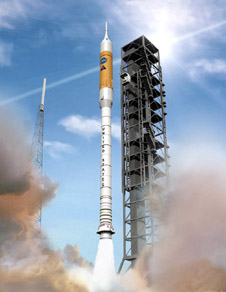 An artist's concept image shows the Ares I crew launch vehicle on the launch pad at NASA's Kennedy Space Center, Florida. The upper stage is the wide part of the rocket near the top. Credit: NASA/MSFC
Print-resolution copy
"You get cavitation – a tiny but powerful pressure wave – that can erode bits of metal from the rocket's fuel pump. If those metal bits make it into the rocket engine, it is not good," says Robert Boyle, of the cryogenics branch at NASA's Goddard Space Flight Center in Greenbelt, Md. Boyle is technical lead on a liquid helium pump which will be used to pressurize the fuel in the Ares 1 upper stage tanks. "If you pressurize the fuel, it helps force it into the rocket engine, and you can avoid bubbles and cavitation because the fuel pump doesn’t have to work so hard," said Boyle.

The helium pump is ground support equipment that will be installed on the rocket's launch tower. At its heart, the pump is a one-inch-diameter piston inside a cylinder which forces the liquid helium into ten 30-inch storage spheres inside the liquid hydrogen tank on Ares 1. At launch, high-pressure helium is routed from the spheres through pipes to the engine, where heat causes a large expansion. The helium gas is then directed through more pipes back to the liquid hydrogen and liquid oxygen tanks, where it expands and helps force the fuel to the engine. Helium is used because it is inert and won't burn (or explode). The pump will be located on the servicing tower, which supports the Ares 1 prior to launch.

Although the concept is simple, making it work was hard. First, at around 4.5 Kelvin (about minus 452 degrees Fahrenheit), liquid helium is one of the coldest fluids in existence. It will quickly freeze the oils used to lubricate a typical compressor, according to Boyle. Also, liquid helium flows very freely – it's about 300 times less viscous than water, and will easily flow past the rings used to seal a typical piston. The team solved this problem by avoiding it altogether. Instead, there is a tiny gap – just two ten-thousandths of an inch wide – between the piston and the cylinder wall. A gap that size is about one-tenth the diameter of a human hair. 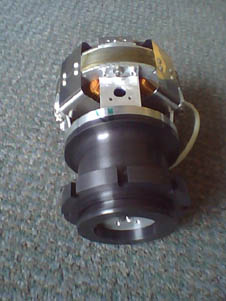 This is a prototype of the liquid helium pump. Credit: NASA/GSFC

The benefit to this approach is that there is no contact and therefore no friction when the piston moves up and down inside the cylinder. No friction means no wear. The pump should last "forever" according to Boyle. "You lose about 5 percent of the helium through the gap – so sue me," says Boyle. "It's a lot cheaper than having to tear apart the pump and repair it over and over."

The difficulty with this design is evenly maintaining such a tiny gap around the entire piston. The team designed special support springs to keep the piston perfectly aligned in the center of the cylinder. Machining the piston and cylinder was no picnic, either. Such a small gap means the tolerances of the parts – the variations in their dimensions – must be even smaller. "It turned out the best way to ream the inside of the cylinder was to use a stone honing tool similar to the ones used to finish cylinders in car engines," said Boyle. "We achieved tolerances just one-tenth the size of the gap, or a hundredth the diameter of a human hair."

Goddard will design, fabricate, qualify, and test the pump. Component development will take place through May of 2009. A demonstration model will be completed by June 2010. If successful, a fully-qualified pump could be built and installed on the launch support tower at NASA's Kennedy Space Center in June 2012. If all testing is successful, the pump could be used during the first astronaut-occupied flight of the Orion crew vehicle on Ares 1 in 2014.

"I've worked on cryogenic projects for many science missions, like COBE, Terra, and Aqua, so it's nice to have a chance to work on a human spaceflight project," said Boyle. "It's certainly easier to relate to my kids – they get excited when I talk about it. Traveling to Kennedy Space Center is great, also – after our November 14 meeting last year, we saw the night launch of the shuttle – it was spectacular."