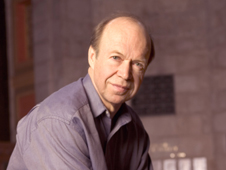 Longtime director of the NASA Goddard Institute of Space Studies (GISS) in New York, Hansen earned the Rossby Medal for "outstanding contributions to climate modeling, understanding climate change forcings and sensitivity, and for clear communication of climate science in the public arena." He was presented with the medal Jan. 14 in Phoenix at the annual meeting of the AMS.

Jim Hansen is performing a tremendous job at communicating our science to the public and, more importantly, to policymakers and decision-makers," said Franco Einaudi, director of the Earth Sciences Division at NASA Goddard Space Flight Center in Greenbelt, Md.

"The debate about global change is often emotional and controversial, and Jim has had the courage to stand up and say what others did not want to hear," Einaudi added. "He has acquired a credibility that very few scientists have. His success is due in part to his personality, in part to his scientific achievements, and in part to his refusing to sit on the sidelines of the debate."

The Carl-Gustaf Rossby Research Medal is presented by AMS to researchers making outstanding contributions to the understanding of the structure or behavior of the atmosphere. The medal is named for Carl-Gustaf Rossby, a pioneer in understanding the dynamics and thermodynamics of the atmosphere, as well as the relationship between the ocean and atmosphere. Founded in 1919, AMS is the nation's leading professional society for more than 12,000 research scientists, professors, students, and weather enthusiasts interested in the atmospheric and related sciences.

In a separate announcement on Dec. 30, Hansen was also named by EarthSky Communications and a panel of 600 scientist-advisors as the Scientist Communicator of the Year. Peers cited Hansen as an "outspoken authority on climate change" who had "best communicated with the public about vital science issues or concepts during 2008."

Hansen studied at the University of Iowa, earning a bachelor’s degree in physics and mathematics, a master’s in astronomy, and a doctorate in physics. He began his scientific career at the Goddard Institute for Space Studies in 1967 as a research associate, and worked his way to the institute directorship by 1981. Since 1978, he also has served as adjunct professor at Columbia University in New York City.

His research has focused on increasing our knowledge of climate change on Earth, particularly changes provoked by human influences on atmospheric composition. With colleagues at GISS and around the world, he is developing and applying global numerical models to better understand climate trends.

> NASA GISS biography of "Who is James Hansen?"
> Awards of the American Meteorological Society
> James Hansen Selected as EarthSky Scientist Communicator of the Year
› Back To Top