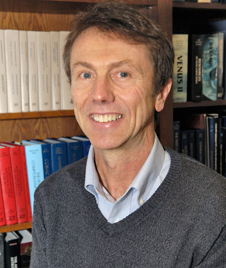 The National Academy of Sciences (NAS) will honor 18 individuals in 2009 with awards recognizing extraordinary scientific achievements in the areas of biology, chemistry, geology, astronomy, social sciences, psychology, and application of science for the public good.

One of those recipients is NASA Goddard's Neil Gehrels who is the recipient of the Henry Draper Medal. Gehrels, chief of the Astroparticle Physics Laboratory at the NASA Goddard, is being honored for his pioneering contributions to gamma ray astronomy. His leadership of the Compton Gamma Ray Observatory and the Swift Mission has led to new insights into the extreme physics of active galactic nuclei and gamma ray bursts. The Henry Draper Medal and a prize of $15,000 are awarded for an original investigation in astronomical physics.

"I am thrilled to receive the Draper award. It is a great recognition for the wonderful science from Swift, Fermi and CGRO and the years of hard work from the teams that built these satellites," Gehrels said.

Gehrels serves as principal investigator of NASA’s Swift mission, and deputy project scientist of NASA’s Fermi Gamma-ray Space Telescope satellite. Since its launch on November 20, 2004, Swift has greatly advanced astronomers’ understanding of stupendously powerful stellar explosions known as gamma-ray bursts. Fermi launched in June 2008, and has already discovered a dozen new pulsars. During the 1990's, Gehrels served as the Project Scientist for the Compton Observatory which was the second of NASA’s four Great Observatories and pioneered observations of the gamma-ray sky.

Gehrels earned his Ph.D. in physics from Caltech in 1981, and came to Goddard as a postdoctoral researcher in the same year. Among his many other honors, Gehrels and his Swift Science Team won the 2007 Rossi Prize from the American Astronomical Society’s High-Energy Astrophysics Division. He is also the 2005 recipient of Goddard’s John C. Lindsay Memorial Award for Space Science. Gehrels was elected to the American Academy of Arts & Sciences in 2008. He is a Fellow of the American Physical Society and an Adjunct Professor of Astronomy at the University of Maryland and of Astronomy and Astrophysics at Penn State University.

The National Academy of Sciences is a private, nonprofit honorific society of distinguished scholars engaged in scientific and engineering research, dedicated to the furtherance of science and technology and to their use for the general welfare. Since 1863, the National Academy of Sciences has served to "investigate, examine, experiment, and report upon any subject of science or art" whenever called upon to do so by any department of the government.

The award will be presented at the April 26 awards ceremony, which will take place during the Academy's 146th annual meeting at the academy in Washington. Gehrels resides in Berwyn Heights, Md.

For information about the National Academy of Sciences, visit: www.nasonline.org Related Links: