Grow Text SizeShrink Text Size
Fermi's Best-Ever Look at the Gamma-Ray Sky
A new map combining nearly three months of data from NASA's Fermi Gamma-ray Space Telescope is giving astronomers an unprecedented look at the high-energy cosmos. To Fermi's eyes, the universe is ablaze with gamma rays from sources within the solar system to galaxies billions of light-years away. 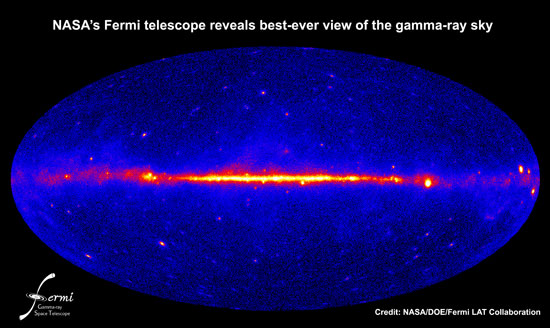 This view from NASA's Fermi Gamma-ray Space Telescope is the deepest and best-resolved portrait of the gamma-ray sky to date. The image shows how the sky appears at energies more than 150 million times greater than that of visible light. Among the signatures of bright pulsars and active galaxies is something familiar -- a faint path traced by the sun. Credit: NASA/DOE/Fermi LAT Collaboration

"Fermi has given us a deeper and better-resolved view of the gamma-ray sky than any previous space mission," said Peter Michelson, the lead scientist for the spacecraft's Large Area Telescope (LAT) at Stanford University, Calif. "We're watching flares from supermassive black holes in distant galaxies and seeing pulsars, high-mass binary systems, and even a globular cluster in our own."

A paper describing the 205 brightest sources the LAT sees has been submitted to The Astrophysical Journal Supplement. "This is the first science product from the mission, and it's a major step toward producing our first catalog later this year," said David Thompson, a Fermi deputy project scientist at NASA's Goddard Space Flight Center in Greenbelt, Md.

The LAT scans the entire sky every three hours when operating in survey mode, which is occupying most of the telescope’s observing time during Fermi's first year of operations. These snapshots let scientists monitor rapidly changing sources.

The all-sky image released today shows us how the cosmos would look if our eyes could detect radiation 150 million times more energetic than visible light. The view merges LAT observations spanning 87 days, from August 4 to October 30, 2008.

To better show individual sources, the new map was processed to suppress emissions from gas in the plane of our galaxy, the Milky Way. As a way of underscoring the variety of the objects the LAT is seeing, the Fermi team created a "top ten" list comprising five sources within the Milky Way and five beyond our galaxy. 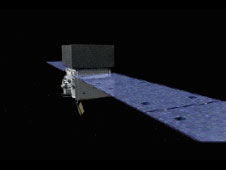 The sun. Now near the minimum of its activity cycle, the sun would not be a particularly notable source except for one thing: It's the only one that moves across the sky. The sun's annual motion against the background sky is a reflection of Earth's orbit around the sun.

"The gamma rays Fermi now sees from the sun actually come from high-speed particles colliding with the sun's gas and light," Thompson notes. "The sun is only a gamma-ray source when there's a solar flare." During the next few years, as solar activity increases, scientists expect the sun to produce growing numbers of high-energy flares, and no other instrument will be able to observe them in the LAT's energy range.

LSI +61 303. This is a high-mass X-ray binary located 6,500 light-years away in Cassiopeia. This unusual system contains a hot B-type star and a neutron star and produces radio outbursts that recur every 26.5 days. Astronomers cannot yet account for the energy that powers these emissions.

PSR J1836+5925. This is a pulsar -- a type of spinning neutron star that emits beams of radiation -- located in the constellation Draco. It's one of the new breed of pulsars discovered by Fermi that pulse only in gamma rays.

47 Tucanae. Also known as NGC 104, this is a sphere of ancient stars called a globular cluster. It lies 15,000 light-years away in the southern constellation Tucana.

Unidentified. More than 30 of the brightest gamma-ray sources Fermi sees have no obvious counterparts at other wavelengths. This one, designated 0FGL J1813.5-1248, was not seen by previous missions, and Fermi's LAT sees it as variable. The source lies near the plane of the Milky Way in the constellation Serpens Cauda. As a result, it's likely within our galaxy -- but right now, astronomers don't know much more than that.

The top five sources beyond our galaxy are:

NGC 1275. Also known as Perseus A, this galaxy at the heart of the Perseus Galaxy Cluster is known for its intense radio emissions. It lies 233 million light-years away.

3C 454.3. This is a type of active galaxy called a "blazar." Like many active galaxies, a blazar emits oppositely directed jets of particles traveling near the speed of light as matter falls into a central supermassive black hole. For blazars, the galaxy happens to be oriented so that one jet is aimed right at us. Over the time period represented in this image, 3C 454.3 was the brightest blazar in the gamma-ray sky. It flares and fades, but for Fermi it's never out of sight. The galaxy lies 7.2 billion light-years away in the constellation Pegasus.

PKS 1502+106. This blazar is located 10.1 billion light-years away in the constellation Boötes. It appeared suddenly, briefly outshone 3C 454.3, and then faded away.

PKS 0727-115. This object's location in the plane of the Milky Way would lead one to expect that it's a member of our galaxy, but it isn't. Astronomers believe this source is a type of active galaxy called a quasar. It's located 9.6 billion light-years away in the constellation Puppis.

Unidentified. This source, located in the southern constellation Columba, is designated 0FGL J0614.3-3330 and probably lies outside the Milky Way. "It was seen by the EGRET instrument on NASA's earlier Compton Gamma Ray Observatory, which operated throughout the 1990s, but the nature of this source remains a mystery," Thompson says.