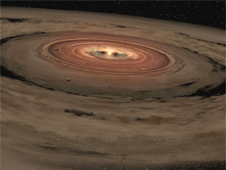 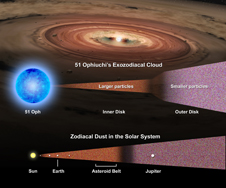 This diagram compares 51 Ophiuchi and its dust disks to the sun, planets and zodiacal dust in the solar system. Zones with larger dust grains are red; those with smaller grains are blue. Planet sizes are not to scale. Credit: NASA/GSFC/Marc Kuchner and Francis Reddy
› Larger image (labeled)
› Larger image (unlabeled) 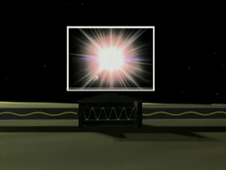 James Fanson, former project manager of the Keck Interferometer, explains how the nuller works. Credit: W. M Keck Observatory
› View movie Astronomers using the twin 10-meter telescopes at the W. M. Keck Observatory in Hawaii have explored one of the most compact dust disks ever resolved around another star. If placed in our own solar system, the disk would span about four times Earth’s distance from the sun, reaching nearly to Jupiter’s orbit. The compact inner disk is accompanied by an outer disk that extends hundreds of times farther.

The centerpiece of the study is the Keck Interferometer Nuller (KIN), a device that combines light captured by both of the giant telescopes in a way that allows researchers to study faint objects otherwise lost in a star’s brilliant glare. "This is the first compact disk detected by the KIN, and a demonstration of its ability to detect dust clouds a hundred times smaller than a conventional telescope can see," said Christopher Stark, an astronomer at NASA’s Goddard Space Flight Center in Greenbelt, Md., who led the research team.

By merging the beams from both telescopes in a particular way, the KIN essentially creates a precise blind spot that blocks unwanted starlight but allows faint adjacent signals – such as the light from dusty disks surrounding the star – to pass through.

In April 2007, the team targeted 51 Ophiuchi, a young, hot, B-type star about 410 light-years away in the constellation Ophiuchus. Astronomers suspect the star and its disks represent a rare, nearby example of a young planetary system just entering the last phase of planet formation, although it is not yet known whether planets have formed there.

"Our new observations suggest 51 Ophiuchi is a beautiful protoplanetary system with a cloud of dust from comets and asteroids extremely close to its parent star," said Marc Kuchner, an astronomer at Goddard and a member of the research team.

Planetary systems are surprisingly dusty places. Much of the dust in our solar system forms inward of Jupiter's orbit, as comets crumble near the sun and asteroids of all sizes collide. This dust reflects sunlight and sometimes can be seen as a wedge-shaped sky glow – called the zodiacal light – before sunrise or after sunset.

Dusty disks around other stars that arise through the same processes are called "exozodiacal" clouds. "Our study shows that 51 Ophiuchi’s disk is more than 100,000 times denser than the zodiacal dust in the solar system," explained Stark." This suggests that the system is still relatively young, with many colliding bodies producing vast amounts of dust."

To decipher the structure and make-up of the star’s dust clouds, the team combined KIN observations at multiple wavelengths with previous studies from NASA’s Spitzer Space Telescope and the European Southern Observatory’s Very Large Telescope Interferometer in Chile.

The inner disk extends about 4 Astronomical Units (AU) from the star and rapidly tapers off. (One AU is Earth’s average distance from the sun, or 93 million miles.) The disk’s infrared color indicates that it mainly harbors particles with sizes of 10 micrometers – smaller than a grain of fine sand – and larger.

The outer disk begins roughly where the inner disk ends and reaches about 1,200 AU. Its infrared signature shows that it mainly holds grains just one percent the size of those in the inner disk – similar in size to the particles in smoke. Another difference: The outer disk appears more puffed up, extending farther away from its orbital plane than the inner disk.

"We suspect that the inner disk gives rise to the outer disk," explained Kuchner. As asteroid and comet collisions produce dust, the larger particles naturally spiral toward the star. But pressure from the star’s light pushes smaller particles out of the system. This process, which occurs in our own solar system, likely operates even better around 51 Ophiuchi, a star 260 times more luminous than the sun.

The findings appear in the October 1 issue of The Astrophysical Journal.