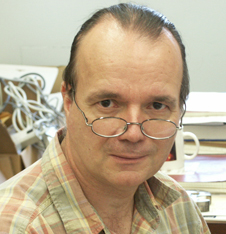 The American Astronomical Society voted the award to Deming for his innovative and pioneering work detecting thermal infrared emission from transiting extrasolar planets using the Spitzer Space Telescope. The Tinsley Prize is awarded every other year by the American Astronomical Society in recognition of an outstanding research contribution to astronomy or astrophysics of an exceptionally creative or innovative character. The prize is named in honor of the late cosmologist and astronomer Beatrice M. Tinsley.

Dr. L. Drake Deming lives in Bowie, Md., with his wife, Grace. He is a planetary scientist and infrared astronomer at NASA's Goddard Space Flight Center, Greenbelt, Md. His research has focused on infrared observations of stellar and planetary atmospheres, including planets in our solar system as well as planets orbiting other stars (extrasolar planets).

"This award reflects the work of my colleagues as much as it does my own role," said Deming, referring to the large technological and scientific effort needed to discover and verify transiting extrasolar planets, as well as the extensive work needed to design, construct, launch, and operate NASA's Spitzer Space Telescope. Spitzer is one of NASA's Great Observatories and is currently in an extended mission phase, following the completion of its prime mission in 2009.

Deming earned a bachelor’s degree in mathematics from the University of Chicago in 1970 and his doctorate in astronomy from the University of Illinois at Champaign-Urbana in 1976. He spent four years teaching astronomy at the University of Maryland, College Park, before coming to Goddard in 1980. He was appointed Chief of Goddard's Planetary Systems Laboratory in 1991 and became Senior Scientist for Exoplanet Studies in 2008. He is currently the Principal Investigator for the Extrasolar Planet Observation and Characterization (EPOCh) investigation on NASA's EPOXI mission.

When he's not working to investigate extrasolar planets, Deming is learning to play the 5-string banjo.

Nicholas E. White, Director of the Sciences and Exploration Directorate at NASA Goddard, said, "The prize is a well-deserved recognition of his work."