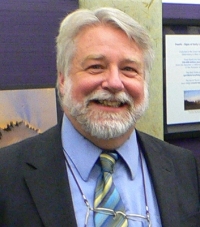 Bob Cahalan is being recognized for his pioneering theoretical and experimental advances in understanding the role of cloud structure in climate; his lead role as Project Scientist of the Solar Radiation and Climate Experiment (SORCE); and his leadership in three-dimensional atmospheric radiative transfer. He has worked global warming and other climate change research at NASA Goddard since 1979, and he is the President at International Radiation Commission.

He co-founded the Chesapeake Education, Arts, and Research Society (CHEARS) with his wife Margaret after being inspired by the Chesapeake Bay Foundation’s 2005 Annual "State of the Bay Report" that called the Bay "a system in crisis." CHEARS is dedicated to the health of the Chesapeake Bay watershed.

CHEARS makes his dedication to the Earth more personal. "Since 1979, when I moved here with my family, we become increasingly concerned with the growing stresses that humans have placed on our Chesapeake Watershed’s fragile ecosystem," Cahalan said. "Pollution generated in urban, suburban and rural population areas, and increasing impacts of global warming, not only endanger human health, but put at risk the very existence of unique species such as the tiny Bog Turtle, oysters and even the Baltimore Oriole."

He resides in Greenbelt with his wife and two sons, where he said "I enjoy learning about farming and biking from my son Joel and about plants and chaos from my son Gabriel."

Bob has been involved host of national and international organizations from the U.S. Department of Energy's Atmospheric Radiation Measurement & NASA Earth Observing Systems-Landsat Science Teams, to universities in the U.S., Canada, and the Netherlands.

New Fellows are elected each year by the AMS Executive Council from a slate submitted by the Fellows Committee of not more than one-tenth of one percent of all AMS Members. The formal announcement of Dr. Cahalan’s election will take place at the 90th AMS Annual Meeting in Atlanta, Georgia during January 17-21, 2010.

Bob said that his favorite quote is from Paul B. MacCready who said, "You can do all kinds of things if you just plunge ahead. It doesn’t mean you’re any good at them, but you can be good enough." Obviously through this AMS nomination, a lot of colleagues believe that Bob is extremely good at what he does.