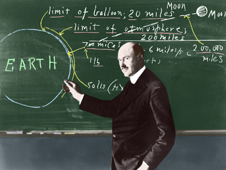 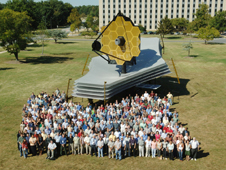 A large crowd of people stand outside in front of a full-scale model of the James Webb Space Telescope. Credit: NASA
> Larger image 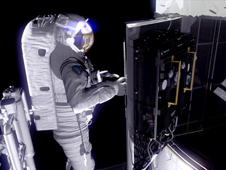 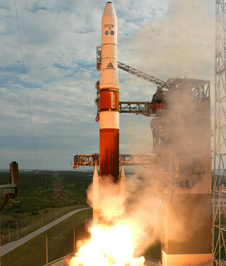 There are many missions getting ready for launch from Goddard in 2009 and beyond. Just as the GOES-13 weather satellite launched in this image of a Boeing Delta IV Rocket in May 2006.Credit: Boeing/Carlton Bailie
> Larger image On a clear March day in 1926, in the middle of a snow-covered field in Auburn, Mass., Dr. Robert Hutchings Goddard changed exploration forever. Launching from a modified music stand, Goddard’s liquid fuel rocket lifted itself 41 feet into the winter sky, flew for two and a half seconds, and landed in the space age. Goddard’s dream had become reality.

To honor Goddard’s achievement and his commitment to the triumph of the human spirit, the Beltsville Space Center officially became the Goddard Space Flight Center on May 1, 1959. Since then, the Center has been at the forefront of exploration and technological achievement.

"In those 50 years, NASA and Goddard have made many extraordinary and fundamental discoveries, and we continue to do incredible things," said Goddard Center Director Rob Strain. There are more than 10,000 dedicated men and women at Goddard who work in astrophysics, Earth science, heliophysics, planetary science and developing new technologies.

In a fitting tribute to its rocket pioneer namesake, Goddard has an ambitious line-up of missions this year. This extraordinary period of activity begins next week with the planned May 5 launch of Tactical Satellite 3 (TacSat 3) from Goddard’s Wallops Flight Facility on Virginia’s Eastern Shore.

Next up is Servicing Mission Four to the legendary Hubble Space Telescope. NASA is targeting May 11 for the launch of the Shuttle STS-125 mission. This is the final house call to the Hubble Space Telescope. Astronauts will conduct five spacewalks and install two new cutting-edge science instruments. They will also refurbish a number of Hubble’s subsystems.

On June 2, NASA plans to launch the Lunar Reconnaissance Orbiter (LRO). LRO will create the most accurate and comprehensive topographic maps of the lunar surface ever, vital for pinpointing landing sites for future manned missions.

The National Oceanic and Atmospheric Administration (NOAA) and NASA plan to launch the next in a series of advanced weather satellites called Geostationary Operational Environmental Satellites (GOES). Goddard has more than 40 years of experience managing the development of satellites operated by NOAA to forecast severe weather and track hurricanes.

"In addition to all of the incredible missions launching this year, Goddard has also been assigned or has competitively won a number of critical future missions," said Strain. Among these are spacecraft to study global precipitation; a robotic mission to Mars to investigate the Red Planet’s lost atmosphere; satellites to monitor the planet’s land masses, glaciers, and ice sheets; missions that will strive to understand mysterious dark energy; and an armada of small probes to study the complex interactions between the Sun and the Earth.

As part of the Center’s 50th anniversary celebrations, Goddard, the Johns Hopkins University Applied Physics Lab, and other will host a day of interactive activities at Maryland’s Place in Space at the Baltimore Convention Center on May 30 from 10:00 a.m.–4:00 p.m. Expect over 100 imaginative exhibits, mind-blowing multi-media presentations, thrilling robotics competitions, NASA astronauts, and much more.

Goddard is one of NASA's largest research centers with the largest cadre of scientists in Maryland. Goddard is located in Greenbelt, Md.; just outside Washington, D.C. Goddard is a major U.S. laboratory for developing and operating unmanned scientific spacecraft.