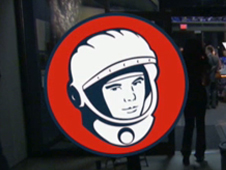 Throughout the evening, more than 750 patrons joined in on the celebration at the Goddard Visitor Center between 7 p.m. and 1 a.m. The event commemorated major milestones in space history and the current and future accomplishments of NASA.

The party at Goddard was a Yuri’s Night celebration, one of 198 in 51 countries. Cosmonaut Yuri Gagarin became the first person in space on April 12, 1961. Exactly 20 years later, NASA launched space shuttle Columbia on mission STS-1.

Dr. Laurie Leshin, Goddard’s Deputy Director of Science and Technology, kicked off the celebration with a presentation on Goddard using the Science on a Sphere exhibit. Live music from the eclectic local band, The Cassettes, and beats infused by “DJ Scientific,” a.k.a. Mark Branch, a NASA aerospace engineer by day and premier hip-hop DJ by night, kept the party energized all night long. 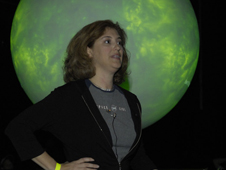 Dr. Laurie Leshin inaugurated Goddard's Yuri's Night festivities with a Science on a Sphere presentation. Credit: NASA/Bill Hrybyk
"I wasn't sure what to expect of Yuri's Night," said Rivers Lamb, a flight dynamics engineer in Goddard’s Flight Dynamics Analysis Branch. “Working at NASA, I knew I'd have fun at the party, but I did wonder what my friends who aren't associated with NASA would think. It turned out to be a good ole party; the DJ was amazing, the band interesting, and Laurie's presentation was educational. It was a great event."

Attendees mixed and mingled throughout the Visitor Center, checking out the latest exhibits as well as the grounds. Daring patrons leaped in the moon bounce and others got their groove on in the outdoor tent lit by professional club lighting.

"I am elated to have been a participant in this celebration of galactic exploration," said Nancy McBee, TIMS customer service representative. "The speakers were very informative and the presentations fascinating as the audience experienced enlightening glimpses of Science on the Sphere. The atmosphere was very high-spirited and delightful." 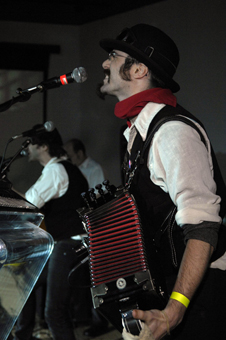 The evening portion of Yuri's Night Goddard followed an afternoon of family-friendly, hands-on activities highlighting amazing space observations of our home planet from 12 p.m. to 4 p.m.

Space Generation Advisory Council is a network of young people committed to using space to make a difference in the world. Founded in 1999, the nonprofit organization is a vast global community of leaders passionate about space. Space Generation's compelling projects, such as Yuri's Night, engage the public in a discussion of the role of space in the sustainability of the planet and in exploring space responsibly and attract new people to their network of active space explorers.

> Flash slideshow feature of the party