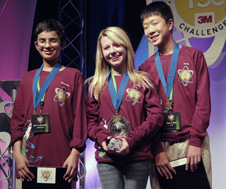 Young Scientist Challenge winner Melissa Rey stands with runners-up Shyamal Buch (left) and Peter Ku next to her. Credit: NASA
> Larger image
Goddard hosted The Discovery Education 3M Young Scientist Challenge competition finals on October 5 and 6 in the Building 8 auditorium and the 7-10-29 building complex. A documentary of the event will be produced for airing on the Discovery channel in early 2009.

“Goddard provides the perfect backdrop for students to see practical, real-world uses for math, science and engineering,” Todd Toth, an education specialist, says. “Everyone had a great time and it was very interesting to watch. This is a great way to inspire the next generation.”

This event would have been incomplete without a Hubble challenge, which was conducted by research scientist Russ Werneth and Goddard resident astronaut Paul Richards. Delaney, along with Clopper, conducted the lunar gravity challenge. Additional challenges included a game show-style program to determine the winning student and teacher.

Andy Burger, from the Goddard safety office, was available throughout to ensure "safety first" for coordinators, challengers and spectators. Trena Ferrell, Goddard educator, provided additional on-site support for the two days of fun, excitement and challenges.

“The participating teachers were absolutely enthralled with the challenges set before them,” says Delaney, a scientist-turned-educator. “Students and teachers were especially excited to meet Goddard personnel, such as astronaut Paul Richards, and scientists Dr. Kim Weaver and Dr. Jim Garvin.”

The Discovery Education 3M Young Scientist Challenge was hosted here as part of a NASA-Discovery Space Act Agreement to celebrate NASA’s 50 years of discovery. The event provided 10 middle school students and five teachers an opportunity to demonstrate their science prowess in a series of team-based, interactive challenges focused on this year’s theme, “The Science of Space.”