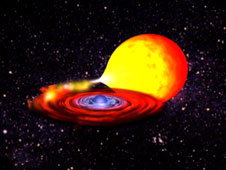 The following four images from a computer animation illustrate a thermonuclear explosion as it ignites, spreads, and engulfs an entire neutron star. Click image to enlarge. Credit: NASA.
> Click to view animation.
Using observations from NASA’s Rossi X-ray Timing Explorer (RXTE), an international team of astronomers has discovered a timing mechanism that allows them to predict exactly when a superdense star will unleash incredibly powerful explosions.

"We found a clock that ticks slower and slower, and when it slows down too much, boom! The bomb explodes," says lead author Diego Altamirano of the University of Amsterdam in the Netherlands.

The bursts occur on a neutron star, which is the collapsed remnant of a massive star that exploded in a supernova. The neutron star belongs to a binary system that can be described as a ticking time bomb. Hydrogen and helium gas from a companion star spirals onto the neutron star, slowly accumulating on its surface until it heats up to a critical temperature. Suddenly, the hydrogen and helium begin to fuse uncontrollably into heavier elements, igniting a thermonuclear flame that quickly spreads around the entire star. The resulting explosion appears as a bright flash of X-rays. 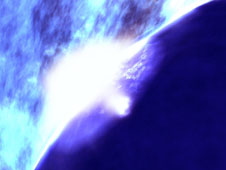 Image 2 of 4. Click image to enlarge. Credit: NASA These bursts, which can occur several times per day from the same neutron star, release more energy in just 10 to 100 seconds than our sun radiates in an entire week. Put another way, the energy is equivalent to 100 fifteen-megaton hydrogen bombs exploding simultaneously over each postage-stamp-size patch of the neutron star’s surface.

Scientists have observed thousands of these X-ray bursts from about 80 different neutron stars. But until now, they had no way to predict when they would occur.

The key to this discovery is RXTE, which makes extremely precise timing measurements of rapidly flickering X-ray-emitting objects. As gas gradually builds up on the neutron star’s surface, hydrogen and helium atoms sometimes fuse into heavier elements in a stable and almost perfectly repetitive fashion. This mode of fusion produces a nearly regular X-ray signal known as a quasi-periodic oscillation, or QPO for short. Theory predicts that the frequency of the cycle should be about 0.009 cycles per second (9 Millihertz, or one cycle every two minutes). This is very close to the QPO frequency in 4U 1636-53 measured by Altamirano and his colleagues using extensive RXTE observations. 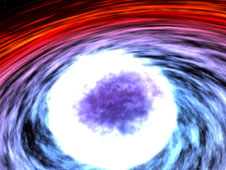 Image 3 of 4. Click image to enlarge. Credit: NASA But the team also found that the QPO frequency decreased over time from about 12 Millihertz to 8 Millihertz. In a paper published in the January 20 Astrophysical Journal Letters, the authors demonstrate that every time the QPO frequency slowed down to about 8 Millihertz (one cycle per 125 seconds), the neutron star in 4U 1636-53 let loose a powerful X-ray burst.

"We are able to predict when these explosions are happening. We have a clock that tells us when the bomb will explode!" says Altamirano.

"We do not yet know if this sequence of events means the oscillations cause the explosion, or if they are just telling us the time has come for an outburst. Further observations from RXTE will be essential to figure this out," adds coauthor Michiel van der Klis, who also works at the University of Amsterdam.

The same group is now studying more than 50 other neutron stars to see if it can identify similar behavior. The 4U 1636-53 system is located about 20,000 light-years away right near the border between the southern constellations of Ara and Norma. 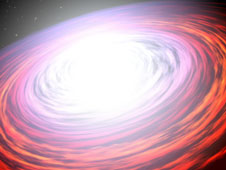 Image 4 of 4. Click image to enlarge. Credit: NASA "It's an exciting discovery," says astrophysicist Tod Strohmayer of NASA’s Goddard Space Flight Center in Greenbelt, Md. "The QPO frequencies are related to the mass and size of the neutron star, so we may be able to use them to pin down the masses of some neutron stars. It gives us a new tool to study these fascinating objects."