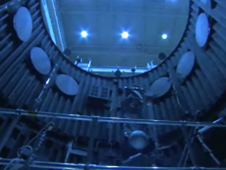 > View a video about Hubble's testing chambers
Credit: NASA
Space is not a hospitable place, and when scientists and engineers design and build new components for the Hubble Space Telescope, that fact is always clearly in mind.

Hubble must endure harsh temperature swings of 215 F, micro-meteor impacts and exposure to solar radiation. On top of that, before a spacecraft like Hubble can operate in orbit, it has to survive the trip to get there. That’s where the environmental testing chambers at NASA’s Goddard Space Flight Center in Greenbelt, Md., come into play.

When astronauts travel to the telescope later this year on Servicing Mission 4, they will take with them 22,000 pounds of cargo, including Wide Field Camera 3 and the Cosmic Origins Spectrograph, Hubble’s new, high-powered scientific instruments.

Most of that cargo -- tools, supplies, instruments, and the like -- gets run through Goddard’s centrifuge, acoustics and thermal vacuum chambers to ensure it can endure the rigors of launch on the space shuttle and the harshness of space travel while orbiting more than 350 miles above Earth’s surface.

These chambers, only a sample of the dozens at Goddard, are housed in the center’s Environmental Test and Integration Facilities. 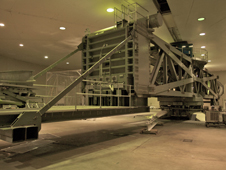 Goddard's centrifuge can accelerate 2.5 tons to speeds so high that the payload experiences forces 30 times greater than the pull of Earth's gravity. Credit: NASA/Chris Gunn
> Larger image The centrifuge simulates the increased feeling of gravity’s pull during a launch. For astronauts, that’s normally a few minutes at two or three times the force of Earth’s gravity, measured in Gs. The equipment being carried in the shuttle’s cargo bay usually sees between 6 and 7 Gs because of vibration.

Goddard’s 120-foot-diameter centrifuge can accelerate a 2.5-ton payload up to 30 Gs, well beyond the force experienced in a launch. The most intense roller-coasters in the world top out at about 5 Gs, and then only for brief moments.

Technicians did not subject the new components going to Hubble on Servicing Mission 4 to the centrifuge’s full intensity, because they will never experience forces that great in their operational lifetimes.

Still, engineers run the tests a little beyond actual environment conditions. “We take the structural loading conditions that we expect to see during launch and then jack them up 25 percent,” says Mike Weiss, Hubble’s technical deputy program manager at Goddard.

Instruments should be able to handle actual conditions if they hold up to the increased, simulated experience. Two 1,250-horsepower motors help the centrifuge produce that experience. 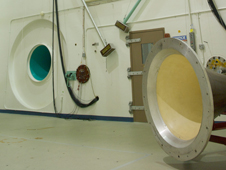 The 6-foot-wide horns in this 42-foot-tall chamber can produce noise at levels as high as 150 dB. Credit: NASA/Chris Gunn
> Larger image It’s true that in space no one can hear you scream. Blastoff, on the other hand, can make quite a racket, which is why the Hubble engineers use the Acoustic Test Chamber.

In this 42-foot-tall chamber, technicians expose payloads to the noise of a launch. To do that, they rely on 6-foot-tall speakers.

The speakers (more accurately called horns) use an altering flow of gaseous nitrogen to produce a sound level as high as 150 decibels for two-minute tests. That’s about the level of sound heard standing next to a jet engine during takeoff.

The speakers are still audible -- at greatly reduced volume -- outside the chamber, even through the insulation of the massive metal doors. 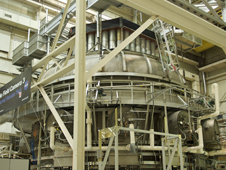 Aside from removing all but the smallest trace of air, Goddard's Thermal Vacuum Chamber can chill a payload down to minus 310 F, or heat it to a sizzling 302 F. Credit: NASA/Chris Gunn
> Larger image Weiss calls the thermal vacuum “the granddaddy of them all.” More so than any of the other chambers, this chamber exposes the Hubble components (and other payloads) to conditions they will experience in space.

The chamber has massive mechanical vacuum pumps, which are essentially large versions of the vacuum cleaners people use at home. To augment those, the chamber uses cryopumps to ensure that the hard vacuum of space is simulated in the test chamber. The cryopumps use liquid nitrogen to condense remaining gases out of the chamber once the mechanical pumps have done their work.

The two types of pumps work together to eliminate all but the tiniest trace of air in the chamber, down to about a billionth of Earth’s normal atmospheric pressure.

To simulate the hot and cold extremes possible in Hubble’s neighborhood, 350 miles up, the thermal vacuum chamber can reach temperatures in a 600-degree range from 302 F all the way down to minus 310 F. This chamber is the perfect place to test Hubble’s thermal protection for that reason, though the chamber will not need to be pushed to its extremes for the trials.

Wide Field Camera 3, built at Goddard, has also spent considerable time in the chamber. This powerful new camera will replace Wide Field and Planetary Camera 2, installed on the telescope during the first servicing mission in 1993.

Engineers tested the new camera in the vacuum chamber by sending commands identical to those it will receive in orbit. Temperature, vacuum and commands combine to make the camera behave exactly as it will once astronauts install it. The vacuum chamber tests have shown that the instrument will function properly.

Hubble may seem like a fragile telescope at first, and in a lot of ways it is. Its solar arrays, antennas and data-gathering instruments are delicate, but Hubble has a robust structure well suited for durability in low-Earth orbit and servicing by shuttle astronauts, Weiss says.

But even after completing their chamber run-throughs, the Hubble components will have one last layover in the Space Systems Development Facility at Goddard. This facility houses the world’s largest Class-10,000 clean room, a place where Hubble’s hardware will be tested and inspected one last time before launch.

> Read the other stories in the "Next Stop: Hubble" series Robert Garner
NASA's Goddard Space Flight Center
› Back To Top