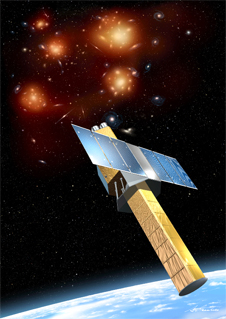 Artist's rendition of of NeXT with galaxies—one of the things it will study—in the background.
Credit: JAXA
> Larger image
An instrument to study the extreme environments of the universe has been given the "green light" from NASA Headquarters. The High-Resolution Soft X-Ray Spectrometer (SXS) was one of the two science proposals recently selected by NASA for the Explorer Program Mission of Opportunity investigations, and is managed at NASA's Goddard Space Flight Center in Greenbelt, Md.

The SXS, to be developed at Goddard, will be installed on the Japan Aerospace Exploration Agency's New exploration X-Ray Telescope, or NeXT. The observatory, currently planned for launch in 2013, will open a new observing window on X-rays and the study of astrophysical phenomena. NASA's proposed funding for the instrument and operations is $44 million. 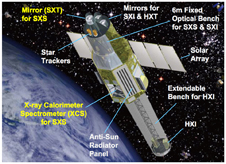 NeXT is a next-generation X-ray astronomy satellite that the Japanese X-ray astronomy group is proposing. SXS Components are noted.
Credit: JAXA
> Larger image "We are thrilled to have the opportunity to create a powerful new x-ray spectrometer that will open up a whole new realm in high energy astrophysics in collaboration with our partners in Japan," said Richard L. Kelley, the Principal Investigator for the SXS mission at Goddard. We have a great team in place that is anxiously waiting to start work."

The SXS will probe matter in extreme environments; investigate the nature of dark matter on large scales in the universe; and explore how galaxies and clusters of galaxies form and evolve.

The SXS was one of two investigations selected from among 17 proposals received by NASA earlier this year. They were evaluated by peer reviewers.
› Back To Top