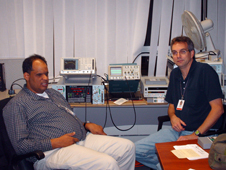 Goddard Space Flight Center employee Marco Midon (left) and Jim Evans, a Honeywell employee at the Wallops Flight Facility, are seen in an office at the American Embassy in Greece, where they set up equipment used to collect data during a Soyuz capsule's re-entry and landing on Oct. 24, 2008. Credit: NASA
> Larger image 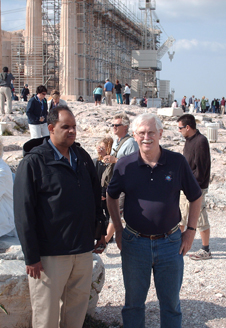 Harry Schenk (right), a Honeywell employee at Goddard, made a last-minute trip to Greece, to ensure final pieces of equipment were in place in time to collect data during the Soyuz re-entry. Credit: NASA
> Larger image
A blind engineer at NASA's Goddard Space Flight Center in Greenbelt, Md., had the vision for a solution to a problem that ultimately required him to fly to Europe to obtain potentially important data on the flight of a Soyuz capsule returning two International Space Station crew members and spaceflight participant Richard Garriott to Earth.

Marco Midon is an electronics engineer in the Microwave and Communications Branch at NASA Goddard and has been with NASA for almost 11 years. He recently provided critical engineering support for the implementation of 18 meter Ka-Band antennas at White Sands Test Facility in New Mexico and also served as NASA systems engineer on a project to upgrade a NASA ground station at McMurdo Station, Antarctica.

Earlier this month, Midon read a memo from the head of space operations at NASA Headquarters asking for ideas on how the agency could respond to a request from the Russian Federal Space Agency to provide telemetry data on the Soyuz capsule during de-orbit and re-entry.

"I saw the e-mail asking for ideas about how data from the Soyuz could be received and recorded and right away I knew how it could be done" said Midon. "The real question was whether it could be done in the time that was available."

The agency-wide request from the head of all human spaceflight efforts came after it was determined that there were no commercial, or space station partner facilities that could provide the service needed because the downlink frequency (VHF) is not usually used for space telemetry. NASA and Russian partners agreed that providing data beyond that which is recorded just prior to separation of the Soyuz modules might be valuable in shedding light on the spacecraft’s past entry performance.

“In the spirit of the old NASA, the Goddard team responded to my request with an amazing 'can-do' attitude. The team was focused on the problem to be solved and let no hurdles stand in the way,” said Bill Gerstenmaier, NASA associate administrator for Space Operations. "Good Soyuz performance is important for International Space Station operations, and any help NASA could provide helps all of the partnership.”

Midon's proposal involved a low-cost mobile system that could be transported and deployed along the track of the separation and re-entry plan of the Soyuz vehicle.

"After getting the go-ahead to pursue my idea, my first course of action was to verify that we could obtain the necessary equipment" said Midon. "I called one vendor about the antenna needed and then another about the pre-amp that would be required to amplify signals tuned to this particular oddball frequency and how both items were needed immediately. The answer from everyone was 'yes,' so rush orders were placed."

With less than four days before Soyuz landing, the next step involved Midon contacting individuals at NASA's Wallops Flight Facility in Virginia to confirm that the center could support a test of the system being proposed. After getting confirmation, he traveled to Wallops and supported activities that simulated what the Russian signal would look like and verified it could indeed be received and recorded.

A day later, all the equipment ordered was in place, and the stage was set for the final test to prove that Midon's idea could indeed work.

"We took the equipment down to Wallops and set up everything," said Midon. "While we were busy doing that, other folks talked to the Russians who agreed to turn on the Soyuz that was docked to the space station for two communication passes. Basically we were 72 hours out from landing and knew we would only have these two short communication passes to prove the whole thing worked.”

As it turned out, the first pass wasn't all that successful with little or no signal received. But Midon came up with some tweaks to the system to make it a little more sensitive and during the second pass, good data was received.

While Midon and his group continued with their efforts, other NASA engineers were busy in determining the best location to place the portable system. Three potential locations were initially identified -- Turkey, North Africa and Greece. After reviewing flight path trajectories, it was decided that Athens would provide the best view to capture telemetry data.

So on Wednesday, October 22, with less than 48 hours before Soyuz landing, the site for the temporary station was set. Midon and Jim Evans, a Honeywell Technical Solutions employee at Wallops, traveled to Baltimore-Washington International airport with all the equipment.

A new challenge arose when one package was determined to be 12 pounds over the airline’s allowed limit. Midon and Evans decided to take most of the equipment on their flight to Greece, while others worked options for getting the remaining equipment delivered.

Because no commercial delivery service could guarantee the equipment would arrive in time, Harry Schenk, a Honeywell employee at Goddard who had helped with earlier efforts, volunteered to fly to Greece with the remaining items.

By the time Midon and Evans arrived in Athens, less than 24 hours remained before the Soyuz flyover would take place. The two went immediately to the American Embassy in Athens which was the chosen location for setting up their equipment.

Throughout the afternoon and into the evening, Midon and Evans worked to set things up while waiting for Schenk to arrive with the final pieces of equipment. By around 10 p.m. and less than eight hours before the event, all the equipment was powered up and verified ready to support.

After finally checking into the hotel and getting at least a few hours sleep, the three men were back at the embassy around 4 a.m., local time, for the Soyuz flyover which was planned for just after 6 a.m.

But there was still one more issue to work.

"When we got back to embassy for the event, we realized a recorder wasn't working," said Midon. "We realized that the likely cause was a heating problem because the room wasn't air conditioned. We found a marine who is one of the few people around at that time of day who found us a fan so we could circulate more air around the unit and that seemed to fix the problem."

Based on information provided by flight dynamics engineers, the antenna on the roof was positioned and just after 6 a.m., the system began receiving data from the Soyuz capsule as it traveled through the atmosphere.

"The pass was very low, only 8 1/2 degrees and we were in a valley so I wasn't sure we were going to get anything" said Midon. "At first, the signal was very weak. But then after two-to-three minutes the signal got much stronger, and it was clear we were getting good data. The strong signal lasted about a minute and with processing back in the lab, we're hoping there is at least 90 seconds of good data that can be utilized."

Later, Midon had a phone conversation with Gerstenmaier who thanked him and his group and said how much both the American and Russian flight control teams appreciated their incredible effort.

Midon remarked "I think the real story here is that we only had two or three days to come up with a solution to something and were then able to implement it in Europe. I may have been the technical guy who figured out how to do it but there were a lot of other folks whose willingness to pitch in provided us with an opportunity to succeed." Ed Campion
NASA's Goddard Space Flight Center
› Back To Top