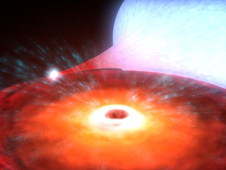 The lowest-mass known black hole belongs to a binary system named XTE J1650-500. The black hole has about 3.8 times the mass of our sun, and is orbited by a companion star, as depicted in this illustration. Credit: NASA/CXC/A. Hobar
> Larger image GREENBELT, Md. - Using a new technique, two NASA scientists have identified the lightest known black hole. With a mass only about 3.8 times greater than our Sun and a diameter of only 15 miles, the black hole lies very close to the minimum size predicted for black holes that originate from dying stars.

"This black hole is really pushing the limits. For many years astronomers have wanted to know the smallest possible size of a black hole, and this little guy is a big step toward answering that question," says lead author Nikolai Shaposhnikov of NASA’s Goddard Space Flight Center in Greenbelt, Md.

Shaposhnikov and his Goddard colleague Lev Titarchuk are presenting their results on Monday, March 31, at the American Astronomical Society High-Energy Astrophysics Division meeting in Los Angeles, Calif. Titarchuk also works at George Mason University in Fairfax, Va., and the US Naval Research Laboratory in Washington, DC. They will describe their results in more detail in a media telecon on April 1 at 1:30 p.m. EDT.

The tiny black hole resides in a Milky Way Galaxy binary system known as XTE J1650-500, named for its sky coordinates in the southern constellation Ara. NASA’s Rossi X-ray Timing Explorer (RXTE) satellite discovered the system in 2001. Astronomers realized soon after J1650’s discovery that it harbors a normal star and a relatively lightweight black hole. But the black hole’s mass had never been measured to high precision.

In this top-down illustration of a black hole and its surrounding disk, gas spiraling toward the black hole piles up just outside it, creating a traffic jam. The traffic jam is closer in for smaller black holes, so X-rays are emitted on a shorter timescale. Credit: NASA
> Larger image The method used by Shaposhnikov and Titarchuk has been described in several papers in the Astrophysical Journal. It uses a relationship between black holes and the inner part of their surrounding disks, where gas spirals inward before making the fatal plunge. When the feeding frenzy reaches a moderate rate, hot gas piles up near the black hole and radiates a torrent of X-rays. The X-ray intensity varies in a pattern that repeats itself over a nearly regular interval. This signal is called a quasi-periodic oscillation, or QPO.

Astronomers have long suspected that a QPO’s frequency depends on the black hole’s mass. In 1998, Titarchuk realized that the congestion zone lies close in for small black holes, so the QPO clock ticks quickly. As black holes increase in mass, the congestion zone is pushed farther out, so the QPO clock ticks slower and slower. To measure the black hole masses, Shaposhnikov and Titarchuk use archival data from RXTE, which has made exquisitely precise measurements of QPO frequencies in at least 15 black holes.

Last year, Shaposhnikov and Titarchuk applied their QPO method to three black holes whose masses had been measured by other techniques. In their new paper, they extend their result to seven other black holes, three of which have well-determined masses. "In every case, our measurement agrees with the other methods," says Titarchuk. "We know our technique works because it has passed every test with flying colors." 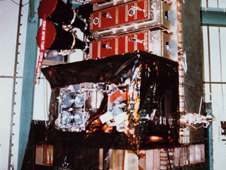 The measurement of the black hole's mass is due to high-precision timing observations made by NASA’s Rossi X-ray Timing Explorer satellite, shown here prior to launch. Credit: NASA
> Larger image When Shaposhnikov and Titarchuk applied their method to XTE J1650-500, they calculated a mass of 3.8 Suns, with a margin of uncertainty of only half a Sun. This value is well below the previous black hole record holder with a reliable mass measurement, GRO 1655-40, which tips the scales at about 6.3 Suns.

Below some unknown critical threshold, a dying star should produce a neutron star instead of a black hole. Astronomers think the boundary between black holes and neutron stars lies somewhere between 1.7 and 2.7 solar masses. Knowing this dividing line is important for fundamental physics, because it will tell scientists about the behavior of matter when it is scrunched into conditions of extraordinarily high density.

Despite the diminutive size of this new record holder, future space travelers had better beware. Smaller black holes like the one in J1650 exert stronger tidal forces than the much larger black holes found in the centers of galaxies, which make the little guys more dangerous to approach. "If you ventured too close to J1650’s black hole, its gravity would tidally stretch your body into a strand of spaghetti," says Shaposhnikov.

Shaposhnikov adds that RXTE is the only instrument that can make the high-precision timing observations necessary for this line of research. "RXTE is absolutely crucial for these black hole mass measurements," he says.

> Read the related feature story
› Back To Top