Saturn Does the Wave in Its Atmosphere
Two decades of scrutinizing Saturn are finally paying off, as scientists have discovered a wave pattern, or oscillation, in Saturn's atmosphere only visible from Earth every 15 years. 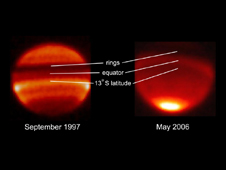 Scientists have discovered a wave pattern, or oscillation, in Saturn's atmosphere only visible from Earth every 15 years. The pattern ripples back and forth like a wave within Saturn's upper atmosphere. In this region, temperatures switch from one altitude to the next in a candy cane-like, striped, hot-cold pattern.

These images were taken with NASA's Infrared Telescope Facility in Mauna Kea, Hawaii. Credit: NASA/JPL
> unlabeled version for print
The discovery of the wave pattern is the result of a 22-year campaign observing Saturn from Earth (the longest study of temperature outside Earth ever recorded), and the Cassini spacecraft's observations of temperature changes in the giant planet's atmosphere over time.

The Cassini infrared results, which appear in the same issue of Nature as the data from the 22-year ground-based observing campaign, indicate that Saturn's wave pattern is similar to a wave pattern found in Earth's upper atmosphere. The earthly oscillation takes about two years. A similar pattern on Jupiter takes more than four Earth years. The new Saturn findings add a common link to the three planets.

"You could only make this discovery by observing Saturn over a long period of time," said Orton, lead author of the ground-based study. "It's like putting together 22 years worth of puzzle pieces, collected by a hugely rewarding collaboration of students and scientists from around the world on various telescopes."

The wave pattern is called an atmospheric oscillation. It ripples back and forth like a wave within Saturn's upper atmosphere. In this region, temperatures switch from one altitude to the next in a candy cane-like, striped, hot-cold pattern. These varying temperatures force the wind in the region to keep changing direction from east to west, jumping back and forth. As a result, the entire region oscillates like a wave.

A "snapshot" of the hot-cold temperature patterns in Saturn's atmosphere was captured by the Cassini Composite Infrared Spectrometer (CIRS). Along with Earth-based data, the "snapshot" also uncovered other interesting phenomena. Among them: the temperature at Saturn's equator switches from hot to cold, and temperatures on either side of the equator switch from cold to hot every Saturn half-year.

Mike Flasar, co-author on the Cassini paper, and Principal Investigator for Cassini's CIRS at NASA's Goddard Space Flight Center, said that Cassini helped define this oscillation in combination with the ground observation campaign.

"It's this great synergy of using ground-based data over time, and then getting up close and personal with the oscillation in Saturn's atmosphere through Cassini," said Flasar. "Without Cassini, we might never have seen the structure of the oscillation in detail."

"CIRS has mapped the vertical structure of Jupiter (from the swingby in 2000) and now Saturn. In both cases CIRS saw evidence of an equatorial oscillation from the vertical structure in temperature: an alternating stacking of warm and cold anomalies with height. Being in orbit about Saturn, CIRS was much closer to its atmosphere and could directly point at Saturn’s limb. This provided both better vertical resolution and a much broader range of altitudes observed than on Jupiter," added Flasar.

"The other partners in this are the ground-based telescopic observations in the infrared, which generally have lower spatial resolution, and so they don’t provide very good information on vertical structure. However, they have continued to observe Saturn (and Jupiter) for more than two decades, and they show the temporal behavior of the equatorial oscillation, with temperatures at the equator oscillating between warm and cold, relative to adjacent latitudes. On Jupiter, the cycle is about four to five years, and it seems to be about 15 years for Saturn," said Flasar.

Cassini scientists hope to find out why this phenomenon on Saturn changes with the seasons, and why the temperature switchover happens when the sun is directly over Saturn's equator.

The Cassini-Huygens mission is a cooperative project of NASA, the European Space Agency and the Italian Space Agency. JPL, a division of the California Institute of Technology in Pasadena, manages the Cassini mission for NASA's Science Mission Directorate, Washington, D.C. The Cassini orbiter was designed, developed and assembled at JPL. The Composite Infrared Spectrometer team is based at NASA's Goddard Space Flight Center, Greenbelt, Md.