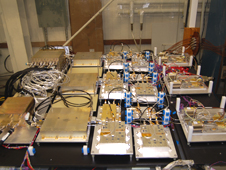 The Aquarius Radiometer, pictured here, spent four years in development before it made its way from Goddard to JPL on Jan. 10, 2008. Credit: NASA
> Larger image
On Jan. 10, 2008, after a four-year development effort, the Goddard Space Flight Center in Greenbelt, Md., delivered the Aquarius Radiometer to the Jet Propulsion Laboratory (JPL) in Pasadena, Calif., for integration with the Aquarius instrument. The radiometer, built by an in-house team of scientists, engineers and technicians at Goddard, is part of the Aquarius mission.

Aquarius is an international collaboration between NASA and the Argentinean Comisión Nacional de Actividades Espaciales (CONAE). Currently scheduled for launch in May 2010, it will greatly improve our understanding of how ocean circulation, the water cycle and climate interact, something we know very little about. Aquarius will measure the concentration of dissolved salts in the ocean’s surface water, called sea surface salinity, a characteristic that varies from place to place.

Neil Martin, Aquarius instrument manager in the Instrument Systems and Technology Division at Goddard, says, “Although everyone knows that seawater is salty, few know that even small variations in salinity can have dramatic effects on the water cycle and ocean circulation. Salinity has never been measured over 24 percent of the ocean’s surface, which means there’s a lot we don’t know about the global water cycle and how it affects our climate.”

While many techniques have been used to test sea surface salinity, none of them have been able to do so globally, which is the reason why approximately 24 percent of the ocean surface has never been sampled. Not only will Aquarius allow us to make measurements of this kind on a global level for the first time ever, but it will also do so rapidly, once every seven days.

The radiometer is absolutely essential in making these measurements. Observations are made using practical salinity units (psu), a unit of measurement that describes the concentration of dissolved salts in water, and the radiometer is capable of detecting changes as small as 0.2 psu. To get some perspective, if you were to dissolve 1 gram (about two pinches) of salt in 1 liter of water, that water would then be 1 psu. The salinity of open ocean water is typically between 32 and 37 psu.

“The basic concepts of this measurement were outlined back in the ’70s,” says Fernando Pellerano, Goddard’s radiometer instrument system engineer. “It took 30 years for technology to catch up to the point of making this mission practical. In more recent years, collaboration between Goddard and JPL demonstrated the ability to build these very stable radiometers. Developing the state-of-the-art Aquarius Radiometer has been a difficult but rewarding experience for the team.”

Aquarius’s ground data system and operations will be managed at Goddard once it is in orbit. Goddard had the sole responsibility for all aspects of the radiometer development, including the design, construction, testing and delivering it to JPL.

After the radiometer is integrated into the rest of the Aquarius instrument at JPL, the entire instrument will be tested for self-compatibility, as well as instrument level performance and quality. The next steps will be transferring it to CONAE’s prime vendor, INVAP, facilities in Bariloche, Argentina, to be integrated into the SAC-D spacecraft and fully tested again, followed by environmental testing in Brazil.