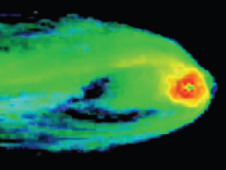 “The surprising result of this model is that the magnetosphere’s main phase pressure is dominated by energetic protons from the plasmasphere, rather than from the solar wind,” says Mei-Ching Fok, an astrophysicist at NASA’s Goddard Space Flight Center in Greenbelt, Md. Fok and her team will present their findings on May 29 at the American Geophysical Union conference in Ft. Lauderdale, Fl.

Violent activity on the sun, such as a solar flare, can produce a monster superstorm that releases plasma into the solar wind. Large flares often result in an ejection of material from the solar corona, called a coronal mass ejection (CME). A CME can spew billions of tons of plasma away from the sun and toward Earth at speeds faster than 1.5 million mph. The plasma affects Earth and the vicinity surrounding Earth dominated by its magnetic field, called the magnetosphere.

As plasma from a superstorm interacts with Earth’s magnetosphere, it can trigger spectacular displays of the Northern Lights, called auroras, interfere with communications between satellites and airplanes traveling near the North Pole, and interrupt global positioning systems and our power grid.

The inner region of Earth’s magnetosphere contains a low-density mixture of hot and cold plasmas, which include the ring current, the plasmasphere, and the radiation belt.

Simulating the sources of superstorm plasmas will help to better understand superstorms and pave the way to predicting their impact on Earth. The details uncovered in the team’s model provide a new piece of the Sun-Earth puzzle.

For more information about how plasma interacts with the inner magnetosphere: