Finding Fireflies next to a Lighthouse: Goddard's New Technology to Study Alien Worlds
NASA Goddard scientist Rick Lyon has been working on potential missions and technologies to find planets around other stars (called exoplanets or extrasolar planets) since the late 1980s. Only recently has he begun to believe that NASA may actually fly a planet-finding mission in his lifetime.

"This is the closest it’s come to being real," he said. 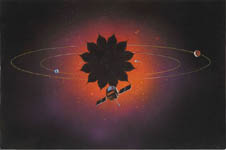 Artist's concept of the New Worlds Observatory. The dark, flower-shaped object in the center is the star shade. Credit: NASA and Northrop Grumman

Print-resolution copy
The possibility of a mission devoted to planet finding is tantalizing, especially to those interested in ratcheting up a science that began 13 years ago when astronomers found and confirmed the existence of the first planet outside the solar system. Since then, scientists have confirmed nearly 300, most of which are gas giants like Jupiter. However, most of these detections have been indirect, because the planets are too faint to be seen directly. Instead, their presence is revealed by measuring how much the unseen world's gravity pulls on its parent star.

The three proposed missions will use new technology to directly detect exoplanets by suppressing the light from their parent stars. Which mission will garner favor is still an open question — it's a challenge that Goddard scientist Mark Clampin likens to "trying to distinguish a firefly next to a lighthouse."

The visible nulling coronagraph (VNC) is a promising technology for directly detecting and characterizing Jupiter-sized gas giants, one of EPIC’s science goals.

The VNC suppresses starlight because waves can interfere with each other and cancel out. This is true for waves of water and waves of light. If you drop two stones into a calm pond at the same time, you'll see flat areas where the ripples meet. These are where the ripples are out of step with each other -- the peak of one ripple meets the trough of the other ripple, and the waves cancel out.

Under this concept, the VNC would be coupled to a single telescope, using interferometry to suppress starlight and increase the contrast of the region surrounding the star. This would allow astronomers to image the planet.

This year, the EPIC team received Internal Research and Development funding to demonstrate the VNC in a vibration-isolated vacuum tank. The aim is to make sure the technology can achieve a stable level of contrast in white light. "We’re going to get the required contrast this year," said Petar Arsenovic, lead technologist for the Center’s Optics Branch. "This technique is certainly possible."

NWO and XPC, on the other hand, would look for planets that lay within the habitable zones of their parent stars — planets that could possibly support life. Although the two missions vary in many ways, both would employ a large deployable occulter or starshade. It would fly in formation with the telescope, separated by thousands of miles.

"The arrangement of NWO’s flower-shaped starshade and telescope in the starshade’s geometric shadow allows planets as close as about 50 milli-arcseconds from the star to be imaged with little interference from the star’s light," said Doug Leviton, who is serving on the NWO team. "Trying to see a planet 50 milli-arcseconds from a star is like trying to make out the fine eyebrow hairs of the nice lady at the other end of the soccer stadium with your unaided eye."

With this technology, NWO would directly image exoplanets and analyze their light (spectrally) to look for evidence of water, oxygen, and methane, which are indicators of life.

XPC also would fly an internal coronagraph, a telescopic attachment that would assist in blocking direct light from a star so that the telescope could resolve orbiting planets and perhaps look for signatures of life.

"Any of these methods will in principle work, but how realistic are they in terms of cost, technology readiness, and risk?" Lyon said. "How do you perform the integration and testing? That’s the purpose of these studies," Lyon said. "Which approach is the lowest risk, build-able within a defined budget and schedule, and provides the most value to NASA, the science community, and the public?"