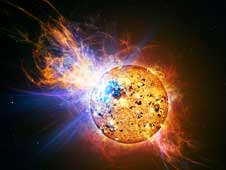 An artist depicts the incredibly powerful flare that erupted from the red dwarf star EV Lacertae. Credit: Casey Reed/NASA
> Larger image
> Print resolution
On April 25, NASA’s Swift satellite picked up the brightest flare ever seen from a normal star other than our Sun. The flare, an explosive release of energy from a star, packed the power of thousands of solar flares. It would have been visible to the naked eye if the star had been easily observable in the night sky at the time.

The star, known as EV Lacertae, isn’t much to write home about. It’s a run-of-the-mill red dwarf, by far the most common type of star in the universe. It shines with only one percent of the Sun’s light, and contains only a third of the Sun’s mass. At a distance of only 16 light-years, EV Lacertae is one of our closest stellar neighbors. But with its feeble light output, its faint magnitude-10 glow is far below naked-eye visibility.

"Here’s a small, cool star that shot off a monster flare. This star has a record of producing flares, but this one takes the cake," says Rachel Osten, a Hubble Fellow at the University of Maryland, College Park and NASA’s Goddard Space Flight Center in Greenbelt, Md. "Flares like this would deplete the atmospheres of life-bearing planets, sterilizing their surfaces."

The flare was first seen by the Russian-built Konus instrument on NASA’s Wind satellite in the early morning hours of April 25. Swift’s X-ray Telescope caught the flare less than two minutes later, and quickly slewed to point toward EV Lacertae. When Swift tried to observe the star with its Ultraviolet/Optical Telescope, the flare was so bright that the instrument shut itself down for safety reasons. The star remained bright in X-rays for 8 hours before settling back to normal.

EV Lacertae can be likened to an unruly child that throws frequent temper tantrums. The star is relatively young, with an estimated age of a few hundred million years. The star rotates once every four days, which is much faster than the sun, which rotates once every four weeks. EV Lacertae’s fast rotation generates strong localized magnetic fields, making it more than 100 times as magnetically powerful as the Sun’s field. The energy stored in its magnetic field powers these giant flares.

EV Lacertae’s constellation, Lacerta, is visible in the spring for only a few hours each night in the Northern Hemisphere. But if the star had been more easily visible, the flare probably would have been bright enough that the star could have been seen with the naked eye for one to two hours.

The flare’s incredible brightness enabled Swift to make detailed measurements. "This gives us a golden opportunity to study a stellar flare on a second-by-second basis to see how it evolved," says Stephen Drake of NASA Goddard.

Since EV Lacertae is 15 times younger than our Sun, it gives us a window into our solar system’s early history. Younger stars rotate faster and generate more powerful flares, so in its first billion years the sun must have let loose millions of energetic flares that would have profoundly affected Earth and the other planets.

Flares release energy across the electromagnetic spectrum, but the extremely high gas temperatures produced by flares can only be studied with high-energy telescopes like those on Swift. Swift's wide field and rapid repointing capabilities, designed to study gamma-ray bursts, make it ideal for studying stellar flares. Most other X-ray observatories have studied this star and others like it, but they have to be extremely lucky to catch and study powerful flares due to their much smaller fields of view.

Says Eric Feigelson of Penn State University in University Park, Pa., "I find it remarkable that a satellite designed to detect the explosive birth of black holes in distant galaxies can also detect explosions on stars in the immediate neighborhood of our Sun."