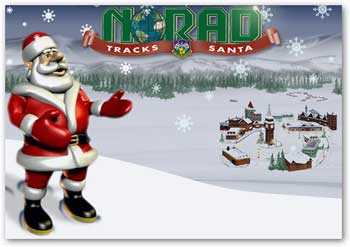 Credit: NORAD Santa According to the US Department of Commerce Census Bureau, the world's population is approximately 6,747,994,729 people (305,910,988 in the U.S.). Santa has had to adapt over the years to having less and less time to deliver gifts. To better assure prompt deliveries and safe flights, higher technology systems are increasingly being used by the United States Northern Command at Peterson Air Force Base Colorado. The USAF uses ground based radars, NOAA operational satellites provided by NASA Goddard Space Flight Center, Santa Cams, and jet fighter aircraft. Global position satellite (GPS) information and carefully timed gravity assists from the sun, moon, and/or earth are used to speed Santa's sleigh faster and more precisely. The 406 MHz Search and Rescue transmitter that Santa will have is equipped with a GPS feature so that National Oceanic and Atmospheric Administration (NOAA) operational satellites (POES and GOES), EUMETSAT's MetOp-A, and Russian COSPAS satellites will know almost instantly within meters where Santa is. Multi-variable modeling improvements in the solar wind, auroras, geomagnetic force fields, and space/earth weather predictions are also being credited for improved sleigh routing efficiencies this year. Rudolph reportedly appreciates the POES and GOES infrared data so that he knows where fog is and can take over the reins from Santa and he says the polar microwave data is great for telling him where the rain, snow, and ice are for those precise landing adjustments.

From 22,300 miles in space, NORAD will use for the first time the GOES-13 improved earth location accuracy and heat detection infrared equipment from various satellites. Rudolph's nose gives off an infrared signature similar to a missile launch and the satellites can detect Rudolph's bright red nose very precisely. NOAA, NASA, and the USAF have satellites precisely positioned and additional volunteers are supporting the improved Santa tracking beginning after sundown on Christmas Eve December 24, 2008. Near "real time" public updates of progress should be available from the web site NORAD Santa and thanks to worldwide corporate and international support updates will be provided in seven languages. Tom Wrublewski
Goddard Space Flight Center
› Back To Top