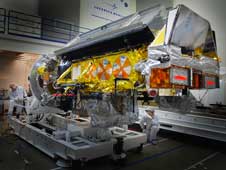 NOAA-N Prime is the latest satellite in the Advanced Television Infrared Observational Satellites –N series built by Lockheed Martin Space Systems Company. NOAA-N Prime will provide a polar-orbiting platform to support environmental monitoring instruments for imaging and measuring the Earth’s atmosphere, its surface and cloud cover, including Earth radiation, atmospheric ozone, aerosol distribution, sea surface temperature, and vertical temperature and water profiles in the troposphere and stratosphere. The satellite will assist in measuring proton and electron fluxes at orbit altitude, collecting data from remote platforms and will assist the Search and Rescue Satellite-Aided Tracking system.

NOAA-N Prime will be prepared for launch in a NASA payload processing facility located on north Vandenberg AFB. On Nov. 5, the satellite will be removed from its shipping container and rotated from the horizontal to vertical position. Spacecraft systems testing and launch preparations will then begin, which will take about a month. 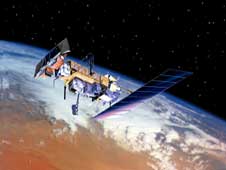 > High resolution
Artist conception of NOAA-N Prime in orbit. Credit: Lockheed Martin Meanwhile, at the launch pad, the rocket that will launch NOAA-N Prime is a Delta II 7320 manufactured and prepared for launch by the United Launch Alliance. The first stage is scheduled to be erected on Space Launch Complex 2 on Dec. 2. The three strap-on solid rocket boosters will be raised and attached to the booster the following day. The second stage which burns hypergolic propellants will be hoisted atop the first stage on Dec. 4. The fairing which will surround the spacecraft will then be hoisted into the clean room of the mobile service tower.

The following week, as a leak check, the first stage will be loaded with liquid oxygen during a simulated countdown. The following day, a simulated flight test will be performed simulating the vehicle’s post-liftoff flight events without fuel aboard. The electrical and mechanical systems of the entire Delta II will be exercised during this test.

In mid-January, the NOAA-N Prime spacecraft will be hoisted atop the Delta II at the launch pad. The following week, a final major test is then ready to be conducted, which will involve the Delta II and NOAA-N Prime working together. This will be a combined minus count and plus count, simulating all events as they will occur on launch day, but without propellants aboard the vehicle. Finally during the last week of January, the fairing will be installed around the spacecraft.

NOAA manages the polar-orbiting operational environmental weather satellite program and establishes requirements, provides all funding and distributes environmental satellite data for the United States. NASA's Goddard Space Flight Center in Greenbelt, Md., procures and manages the development and launch of the NOAA satellites for NOAA on a cost reimbursable basis.