Dr. Billy R. Smith Jr., director of the USNA Small Satellite Program and MidSTAR-1 program manager, inspects MidSTAR-1 for damage after vibration testing at the Naval Research Laboratory. This test demonstrated that the satellite could survive the rigors of launch and retain functionality. High-efficiency, triple-junction gallium arsenide solar cells cover the sides; the S-band transmit antenna is visible at the upper right. The external neutron detector for the MicroDosimeter Instrument (MiDN) is visible on the top. Credit: USNA > Larger image Two new technologies launched onboard a U.S. Naval Academy satellite called MidSTAR-1 have proven successful in their tests in space. One technology is a sensor that can check for harmful chemicals and the other is a special "film" that can control heat.

The nano chemsensor unit (NCSU), can sense chemicals and contaminants that may be harmful to astronauts, as well as a wide range of scientifically interesting compounds. "The chemical nanosensor is like a smoke detector that would fit on the end of an eraser," said Dan Powell, lead nanotechnologist for Goddard. The NCSU was developed by Dr. Jing Li of Ames. Goddard was instrumental in identifying applications, as well as facilitating this first-ever demonstration of applied nanotechnology in space, on-board MidStar-1.

The NCSU's successful operation aboard MidSTAR-1 proved that it senses target chemicals both accurately and repeatedly in space. The NCSU uses a network of tiny carbon nanotubes that are about 10,000 times thinner than a human hair, to sense various gases and their concentrations. These nanosensors are developed for NASA missions, such as cabin air monitoring for a crew exploration vehicle, in-flight fuel leak detection, planetary exploration, and earth science observation. This experiment proved that the nanosensors are robust and can undergo the vigorous launch process and can work in the space environment, such as microgravity, radiation, temperature variation, and vacuum.

The sensor in orbit was designed to detect trace amounts of nitrogen dioxide, a common air pollutant. This capability, when combined with the unit's extremely small size, power consumption and heat output makes the NCSU useful to many industries. It could find its way into homeland security applications such as explosives trace detectors.

The NCSU also can be used to measure nitrogen dioxide levels in the upper atmosphere. "If you had a sensor like this, the size of a postage stamp, you could lick and stick it to monitor chemicals and environmental constituents anywhere," Powell said. "NASA wants to put this in the International Space Station to monitor contaminants, and the Federal Aviation Administration may build hand-held NCSU systems so aircraft crews could detect explosives and/or harmful gases in aircraft," Powell said.

MidSTAR-1 sits aboard an Atlas 5 rocket the night before launch at Cape Canaveral Air Force Station in Florida. Credit: United Launch Alliance > Larger image A relatively cheap integrated NCSU system capable of being stuck to any surface would have a wireless radio transmitter, ad-hoc network, and tiny solar cell or battery power supply about the size of a quarter. It could monitor environments and relay detection data for months or years before a replacement would be needed.

Since MidSTAR-1 was launched in March 2007, the sensor has been improved and can now detect and identify more than 15 different chemicals, including ammonia, hydrogen peroxide, hydrogen chloride, and formaldehyde.

Second-generation NCSUs being developed for the space station are capable of selectively sensing several chemical compounds simultaneously and may be hardwired to a permanent power- and data-transmission system for continuous, long-term monitoring of a wide array of environments. Whether wireless or hard-wired, the systems could relay environmental status, contamination or threat data from multiple sites to centralized monitoring-stations located just about anywhere in the world, including to and from spacecraft and orbiting satellites.

The second successful revolutionary experiment on MidSTAR-1 is a variable emissivity film. The flight onboard MidSTAR-1 demonstrated how a special film, no thicker than an empty plastic sandwich bag, can control the temperature on a spacecraft. The technology had not been demonstrated successfully in space until MidSTAR-1. Until now, it has been difficult to make a film that could survive the harsh conditions of space.

Electrochromics is the science behind the film, which could be applied to outer surface of a spacecraft. By controlling voltage differential across the film, it is possible to change the film's ability to radiate waste heat into space or keep heat in a spacecraft. Very little power is needed, and the process is reversible. 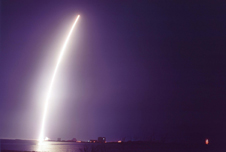 The United Launch Alliance booster shot into the night sky above Florida's Cape Canaveral Air Force Station on March 8, 2007 at 10:10 p.m. EST, carrying MidSTAR-1 into orbit. Credit: United Launch Alliance > Larger image Used on a spacecraft, the film can reduce launch weight, make future thermal design easier, reduce power consumption, and allow more accurate control of the spacecraft's inside temperature. The weight savings could be used to accommodate additional payloads, scientific instruments and astronauts. The film also could be used on satellites, space antennas, spacesuits and visors and robotic systems that will be placed on the Moon and other planets in the future.

There are many applications for this technology beyond space. It could be used to cover buildings and homes to reduce solar heat gain in the summer and decrease heat loss in the winter. One day, it could be possible to control the tint of a car window with the press of a button.

The variable emissivity film was manufactured by Eclipse Energy Systems Inc., of St. Petersburg, Fla., with joint financial sponsorship from Goddard and the U.S. Air Force.

"MidSTAR is the seventh piece of hardware that the small satellite program has flown. It's by far the most sophisticated and most ambitious," Smith said. "It's proven to be the most productive and all four experiments operating in space are producing excellent data." Naval Academy students built the MidSTAR-1 satellite and placed the experiments onboard. The school currently controls the satellite and collects data, transferring it to Eclipse and other users.

Naval Academy students are building another satellite, MidSTAR-2. Work will continue through 2008 under the auspices of the U.S. Defense Department. MidSTAR-2 will carry four Goddard experiments into space in 2011 to look at different parts of Earth's atmosphere, gamma rays and solar winds.