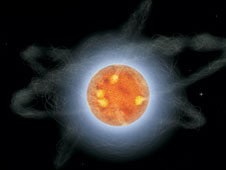 This artist rendering depicts how a magnetar might appear if we could travel to one and view it up close, something that would not be advisable. Credit: Sky & Telescope, Gregg Dinderman.
> Click here for larger image

Observations from NASA’s Rossi X-ray Timing Explorer (RXTE) have revealed that the youngest known pulsing neutron star has thrown a temper tantrum. The collapsed star occasionally unleashes powerful bursts of X-rays, which are forcing astronomers to rethink the life cycle of neutron stars.

"We are watching one type of neutron star literally change into another right before our very eyes. This is a long-sought missing link between different types of pulsars," says Fotis Gavriil of NASA’s Goddard Space Flight Center in Greenbelt, Md., and the University of Maryland, Baltimore. Gavriil is lead author of a paper in the February 21 issue of Sciencexpress.

A neutron star forms when a massive star explodes as a supernova, leaving behind an ultradense core. Most known neutron stars emit regular pulsations that are powered by rapid spins. Astronomers have found nearly 1,800 of these so-called pulsars in our galaxy. Pulsars have incredibly strong magnetic fields by Earthly standards, but a dozen of them — slow rotators known as magnetars — actually derive their energy from incredibly powerful magnetic fields, the strongest known in the universe. These fields can stress the neutron star’s solid crust past the breaking point, triggering starquakes that snap magnetic-field lines, producing violent and sporadic X-ray bursts.

But what is the evolutionary relationship between pulsars and magnetars? Astronomers would like to know if magnetars represent a rare class of pulsars, or if some or all pulsars go through a magnetar phase during their life cycles. 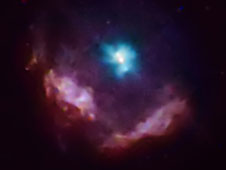 This Chandra image shows the supernova Kes 75. The pulsar is in the center of the blue area at the top. Credit: NASA/CXC/M. Gonzalez/F. Gavriil/P. Slane
> Click for larger image.
> Click for high resolution TIF image Gavriil and his colleagues have found an important clue by examining archival RXTE data of a young neutron star, known as PSR J1846-0258 for its sky coordinates in the constellation Aquila. Previously, astronomers had classified PSR J1846 as a normal pulsar because of its fast spin (3.1 times per second) and pulsar-like spectrum. But RXTE caught four magnetar-like X-ray bursts on May 31, 2006, and another on July 27, 2006. Although none of these events lasted longer than 0.14 second, they all packed the wallop of at least 75,000 Suns. "Never before has a regular pulsar been observed to produce magnetar bursts," says Gavriil.

"Young, fast-spinning pulsars were not thought to have enough magnetic energy to generate such powerful bursts," says coauthor Marjorie Gonzalez, who worked on this paper at McGill University in Montreal, Canada, but who is now based at the University of British Columbia in Vancouver. "Here’s a normal pulsar that’s acting like a magnetar."

Observations from NASA’s Chandra X-ray Observatory also provided key information. Chandra observed the neutron star in October 2000 and again in June 2006, around the time of the bursts. Chandra showed the object had brightened in X-rays, confirming that the bursts were from the pulsar, and that its spectrum had changed to become more magnetar-like. 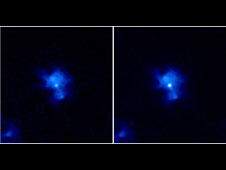 These images from NASA's Chandra X-ray Observatory show the pulsar in Kes 75 in October 2000 (left) and June 2006 (right). The pulsar clearly brightened in X-rays after giving off powerful outbursts earlier in 2006. Credit: NASA/CXC/M. Gonzalez/F. Gavriil/P. Slane.
> Click for larger image. Astronomers know that PSR J1846 is very young for several reasons. First, it resides inside a supernova remnant known as Kes 75, an indicator that it hasn’t had time to wander from its birthplace. Second, based on the rapidity that its spin rate is slowing down, astronomers calculate that it can be no older than 884 years — an infant on the cosmic timescale. Magnetars are thought to be about 10,000 years old, whereas most pulsars are thought to be considerably older.

The fact that PSR J1846’s spin rate is slowing down relatively fast also means that it has a strong magnetic field that is braking the rotation. The implied magnetic field is trillions of times stronger than Earth’s field, but it’s 10 to 100 times weaker than typical magnetar field strengths. Coauthor Victoria Kaspi of McGill University notes, "PSR J1846’s actual magnetic field could be much stronger than the measured amount, suggesting that many young neutron stars classified as pulsars might actually be magnetars in disguise, and that the true strength of their magnetic field only reveals itself over thousands of years as they ramp up in activity."