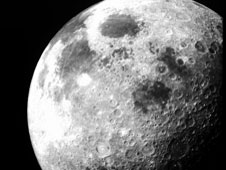 After Apollo 12 left lunar orbit this image of the Moon was taken from the command module on 11/24/69. Credit: NASA
> Print size resolution
Scientists working at NASA’s Goddard Space Flight Center in Greenbelt, Md., have concocted an innovative recipe for giant telescope mirrors on the Moon. To make a mirror that dwarfs anything on Earth, just take a little bit of carbon, throw in some epoxy, and add lots of lunar dust.

"We could make huge telescopes on the moon relatively easily, and avoid the large expense of transporting a large mirror from Earth," says Peter Chen of NASA Goddard and the Catholic University of America, which is located in Washington, D.C. "Since most of the materials are already there in the form of dust, you don’t have to bring very much stuff with you, and that saves a ton of money."

Chen and his Goddard colleagues Douglas Rabin, Michael Van Steenberg, and Ron Oliversen are presenting their mirror-making technique in a poster at the 212th meeting of the American Astronomical Society in St. Louis, Mo. They will also describe their results in a press conference on Wednesday, June 4 at 9:30 a.m. CDT.

For years, Chen had been working with carbon-fiber composite materials to produce high-quality telescope mirrors. But Chen and his colleagues decided to try an experiment. They substituted carbon nanotubes (tiny tubular structures made of pure carbon) for the carbon-fiber composites. When they mixed small amounts of carbon nanotubes and epoxies (glue-like materials) with crushed rock that has the same composition and grain size as lunar dust, they discovered to their surprise that they had created a very strong material with the consistency of concrete. This material can be used instead of glass to make mirrors.

They next applied additional layers of epoxy and spun the material at room temperature. The result was a 12-inch-wide mirror blank with the parabolic shape of a telescope mirror. All of this was achieved with minimal effort and cost.

"After that, all we needed to do was coat the mirror blank with a small amount of aluminum, and voilà, we had a highly reflective telescope mirror," says Rabin. "Our method could be scaled-up on the moon, using the ubiquitous lunar dust, to create giant telescope mirrors up to 50 meters in diameter." Such an observatory would dwarf the largest optical telescope in the world right now: the 10.4-meter Gran Telescopio Canarias in the Canary Islands.

The capabilities of a 50-meter telescope on the Moon boggle the imagination, according to NASA. With a stable platform, and no atmosphere to absorb or blur starlight, the monster scope could record the spectra of extra solar terrestrial planets and detect atmospheric biomarkers such as ozone and methane. Two or more such telescopes spanning the surface of the Moon can work together to take direct images of Earth-like planets around nearby stars and look for brightness variations that come from oceans and continents. Among many other projects, it could make detailed observations of galaxies at various distances, to see how the universe evolved.

"Constructing giant telescopes provides a strong rationale for doing astronomy from the moon," says Chen. "We could also use this on-site composite material to build habitats for the astronauts, and mirrors to collect sunlight for solar-power farms."

Chen notes that his group achieved this breakthrough with only the support of small NASA internal seed funds. The carbon nanotubes were contributed by Dan Powell, Lead Nanotechnologist for NASA Goddard. Several amateur astronomers made key contributions by advising and making special epoxy formulations, helping with polishing experiments, and vacuum coating the 12-inch mirror.