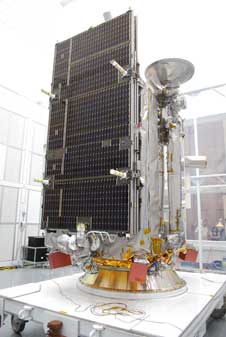 > Larger image
LRO spacecraft in the Goddard Space Flight Center cleanroom. Credit: NASA/GSFC The orbiter will carry seven instruments to provide scientists with detailed maps of the lunar surface and increase our understanding of the moon's topography, lighting conditions, mineralogical composition and natural resources. Data returned to Earth from the Lunar Reconnaissance Orbiter will be used to select safe landing sites, determine locations for future outposts and help mitigate radiation dangers to astronauts. The spacecraft will spend at least a year in a low, polar orbit approximately 30 miles above the lunar surface while the instruments work together to collect detailed information about the moon's environment.

The thermal vacuum testing on the spacecraft took about two months. The orbiter, which was built at Goddard, was subjected to the extreme temperature cycles of the lunar environment as engineers conducted simulated flight operations.

"We have cooked LRO, frozen it, shaken it, and blasted it with electromagnetic waves, and still it operates," said Dave Everett, LRO mission system engineer at Goddard. "We have performed more than 2,500 hours of powered testing since January, more than 600 of that in vacuum."

The first two checks were the spin and vibration tests. The spin test determined the spacecraft's center of gravity and measured characteristics of its rotation. During vibration testing, engineers checked the structural integrity of the spacecraft aboard a large, shaking table that simulated the rigorous ride the orbiter will encounter during liftoff aboard an Atlas rocket.

Next, the orbiter was subjected to acoustics testing. The bagged spacecraft was placed near wall-sized speakers that simulate the noise-induced vibrations of launch. Following acoustics testing, LRO underwent tests that simulated the orbiter's separation from the rocket during launch. The spacecraft also underwent electromagnetic compatibility testing to ensure internal and external electrical signals do not interfere with its critical functions. 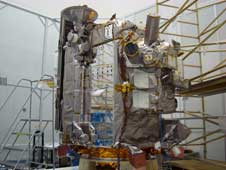 > Larger image
Another photo of the LRO spacecraft in the Goddard Space Flight Center cleanroom. Credit: NASA/GSFC "It was less than one year ago that LRO was a myriad collection of parts not yet delivered to our clean room," said Craig Tooley, LRO project manager at Goddard. "This truly is a significant accomplishment -- a hard earned milestone. It is a humbling and awe-inspiring experience to work with the LRO team."

LRO will be shipped to NASA's Kennedy Space Center in Florida in early 2009 to be prepared for its April 24 launch aboard an Atlas V rocket. Accompanying the spacecraft will be the Lunar Crater Observation and Sensing Satellite, a mission that will impact the moon's surface in its search for water ice.