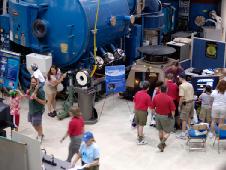 Beyond food, music, and entertainment on the Mall, the day was filled with exhibits and demonstrations from Goddard’s many current and future missions. Kids of all ages were filled with wonder at the dozens of interactive activities that filled the many buildings open to the public.

Visitors had the rare opportunity to see actual spaceflight hardware while touring the Building 7/10/15/29 complex. Guests also got to see the centrifuge and acoustic chamber in action. “We’re having a great time. I really had no idea NASA was doing so much,” said Mark Reynolds of Catonsville, Md.

“I liked the Sun movie best, but I haven’t been to the Hubble model yet,” said Mr. Reynolds’s 9-year-old son Uriah.

One of the more popular events on the Mall was the festival of Cakes. Warren Brown of CakeLove and The Food Network provided cakes, brownies, and cookies to help celebrate NASA’s 50th anniversary. NASA Associate Administrator Christopher Scolese, Goddard Center Director Rob Strain, Maryland Congressman Steny Hoyer, and CakeLove founder Warren Brown prepare to cut the LaunchFest made the ceremonial first cut of the NASA birthday cake. Those attending sang "Happy Birthday" with musical accompaniment by members of The Columbia Orchestra. 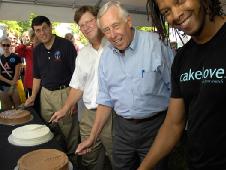 The Building 28 tour featured the Flight Dynamics Facility. Part of this facility was the 3D Visualization for Advanced Mission Planning, better known as “The Cave.” The Cave is a 12’ x 12’ room with projection screens for walls. Groups entered the room wearing 3D glasses. Stars, the Shuttle, and Earth are projected onto the screens, surrounding the group in the Cave. The high definition visual experience left many spellbound. “It felt like you had an astronaut’s eye view of the Earth,” said Jacklyn Putman of Glen Burnie, Md.

Among many activities at the Visitor Center, kids had a chance to design and build their own rockets out of various materials. Tyler Engle of Upper Marlboro, Md., said, “I liked the air rockets. They were the fastest.”

The list of hard-working people involved in the success of LaunchFest is way too long to fit here. A good portion of the credit, however, goes to the LaunchFest volunteers. The light blue t-shirts were seen everywhere on Center, from leading tours to giving directions to directing traffic. 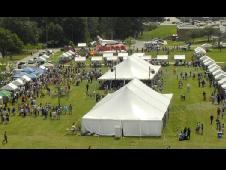 This photograph shows the LaunchFest activities set up on the Goddard mall. Credit: NASA's Goddard Space Flight Center
> Larger image Thanks must also go to all the Goddard employees who gave of their time to share their work with others. LaunchFest could not have happened without their contribution. “All the folks we spoke with were friendly and showed a great enthusiasm for their work,” said Tara Schneider.

LaunchFest was sponsored by Ball Aerospace, Honeywell International, Lockheed Martin, Comcast, and other sponsors, and was made possible by a partnership with the National Capital Section of the American Institute of Aeronautics and Astronautics.

After a day full of learning and fun, visitors to LaunchFest left Goddard feeling inspired and more curious about NASA’s missions. 11 year old James Davis of Alexandria, Va. said, “It was amazing. I hope they do this every year.”