NASA Observes La Niña: This 'Little Girl' Makes a Big Impression
Cool, wet conditions in the Northwest, frigid weather on the Plains, and record dry conditions in the Southeast, all signs that La Niña is in full swing.

With winter gearing up, a moderate La Niña is hitting its peak. And we are just beginning to see the full effects of this oceanographic phenomenon, as La Niña episodes are typically strongest in January.

A La Niña event occurs when cooler than normal sea surface temperatures form along the equator in the Pacific Ocean, specifically in the eastern to central Pacific. The La Niña we are experiencing now has a significant presence in the eastern part of the ocean.

“With this La Niña, the sea-surface temperatures are about two degrees colder than normal in the eastern Pacific and that’s a pretty significant difference,” says David Adamec of NASA’s Goddard Space Flight Center, Greenbelt, Md. “I know it doesn’t sound like much, but remember this is water that probably covers an area the size of the United States. It’s like you put this big air conditioner out there -- and the atmosphere is going to feel it.”

Image right: The blue area throughout the center of this image shows the cool sea surface temperature along the equator in the Pacific Ocean during this La Niña episode. Click image for enlargement. Credit: NASA/Goddard's Scientific Visualization Studio

While this “air conditioner” may be located in the equatorial Pacific Ocean, it has a great influence on the weather here in the United States and across the globe.

The cool water temperatures of a La Niña slow down cloud growth overhead, causing changes to the rainfall patterns from South America to Indonesia. These changes in rainfall affect the strength and location of the jet stream -- the strong winds that guide weather patterns over the United States. Since the jet stream regulates weather patterns, any changes to it will have a great impact on the United States.

Those changes can be felt throughout the country. The Northwest generally experiences cooler, wetter weather during a La Niña. On the Great Plains, residents normally see a colder than normal winter and southeastern states traditionally experience below average rainfall. 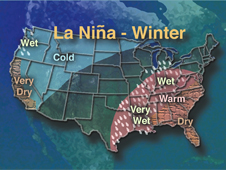 Image right: La Niña's effects can be felt throughout the United States through changes in the weather. This map shows the typical weather patterns associated with a La Niña during the winter months. Click image for enlargement. Credit: NASA

The cooler waters of a La Niña event also increase the growth of living organisms in this part of the ocean. La Niñas amplify the normal conditions in the Pacific. These typically cool and abundant waters experience an increase in phytoplankton growth when the water temperature drops even further.

The increased circulation that brings up cold water from below also brings up with it nutrients from the deeper waters. These nutrients feed the organisms at the bottom of the food chain, starting a reaction that increases life in the ocean. NASA’s SeaWiFS satellite documented this increase in phytoplankton during the last La Niña period in 1998.

La Niña and El Niño episodes tend to occur every three to five years. La Niñas are often preceded by an El Niño, however this cycle is not guaranteed.

The lengths of La Niña events vary as well. “We need to watch to see if this La Niña diminishes, because they can last for multiple years. And if it does last for multiple years, the southern tier of the United States, especially the Southeast, can expect dryer weather. That is not a good situation. If this La Niña behaves like a normal event, we should see signs that it is beginning to weaken by February,” says Adamec.

Image right: The cooler waters of a La Niña inhibit cloud growth overhead as seen in this image of the Pacific Ocean on Nov. 8, 2007. Click image for enlargement. Credit: NASA/Goddard's Scientific Visualization Studio

So far this La Niña is behaving like a textbook case: following the predicted weather patterns, strengthening throughout the winter, and peaking toward January. According to NOAA’s Climate Prediction Center, this La Niña episode is expected to continue until the spring of 2008, with a gradual weakening starting in February.

NASA will continue to monitor this phenomenon with several of its key Earth observing satellites.

Instruments on NASA’s Terra and Aqua satellites measure sea surface temperature and observe changes to life in the ocean, changes of great importance to the fishing industry. The MODIS instruments on these satellites detected the temperature drop that signaled this La Niña period, and SeaWiFS continues to monitor ocean life.

Scientists also look at sea surface height to understand La Niña. The cooler ocean water associated with a La Niña contracts, lowering sea-surface heights. Over the past year, NASA’s Jason satellite has observed a lower than normal sea level along the equatorial Pacific where this current La Niña episode is taking place.

NASA also looks at changes in wind and rain patterns to study La Niña. The QuikSCAT satellite measures changes in oceanic surface winds, while the Tropical Rainfall Measuring Mission satellite observes changes in rainfall. These observations add to a fuller understanding of this phenomenon.

The current La Niña episode has far many reaching effects. What some may see as just a small change in sea surface temperature has a much greater impact on our climate here in the U.S. and across the globe, as well as implications for the fishing industry and the global economy. With the help of NASA’s earth observing fleet, scientists are becoming better equipped to observe and understand this phenomenon.