"We were getting ready for a routine engineering run when all of a sudden the nova went off. It was very bright and easy to observe, so we took this opportunity and turned it into gold," says team member Marc Kuchner of NASA’s Goddard Space Flight Center in Greenbelt, Md. 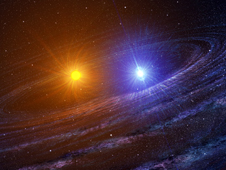 Image right: This artist rendering depicts the RS Ophiuchi binary system shortly after the white dwarf (right) has exploded as a nova. The other star is a red giant. Note the spiral dust lanes. Click image for enlargement. Credit: Casey Reed

The team used the "nulling" mode of the Keck Interferometer, which is part of the Keck Interferometer, built by the Jet Propulsion Laboratory in Pasadena, Calif. This state-of-the-art instrument combines starlight using two 10-meter (33 feet) telescopes. In the nulling mode, the interferometer suppresses the blinding light of a star so researchers can study the surrounding environment. The instrument helps researchers observe very faint objects near bright sources and produces ten times more resolving power than a single Keck telescope working alone. It is the only instrument of its kind in operation.

"Because a star is so much brighter than its surroundings, something has to block the light, which is what the nuller does," says Rachel L. Akeson, Keck Interferometer project scientist at the California Institute of Technology's Michelson Science Center. "This technique turns out to be useful for lots of other kinds of objects, including this one, where dust is near a star that just went nova."

The Keck Nuller was undergoing tests on February 12, 2006, when a nova flared up in the constellation Ophiuchus. The system, known as RS Ophiuchi, consists of a white dwarf and a red giant. The red giant is gradually shedding its massive gaseous outer layers, and the white dwarf is sweeping up much of this wind, growing in mass over time. As the matter builds up on the white dwarf’s surface it eventually reaches a critical temperature that ignites a thermonuclear explosion that causes the system to brighten 600-fold. RS Ophiuchi was previously seen to blow its stack in 1898, 1933, 1958, 1967, and 1985, so astronomers were eagerly anticipating the 2006 eruption. 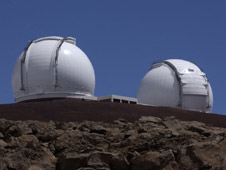 The star in the constellation Ophiuchus went nova at the perfect time, on February 12, 2006. "We were extremely lucky, because we had astronomers in place at two mountain-top interferometers, Keck in Hawaii and IOTA in Arizona," says the team’s principal investigator, Wes Traub, JPL's Exoplanet Exploration Program chief scientist. "Within minutes of hearing about the discovery of the nova, we alerted both teams to start observing it that night."

Just 3.8 days after the nova was detected, the group observed the explosion with the Keck Nuller. The team set the instrument to cancel out the nova’s light, allowing the group to see the much fainter surrounding material. The group next adjusted the nuller to observe the extremely bright blast zone.

The instrument’s versatility was key to a surprising discovery. The nuller saw no dust in the bright zone, presumably because the nova’s blast wave vaporized dust particles. But farther from the white dwarf, at distances starting around 20 times the Earth-Sun distance, the nuller recorded the spectral signature of silicate dust. The blast wave had not yet reached this zone, so the dust must have pre-dated the explosion.

"This flies in the face of what we expected. Astronomers had previously thought that nova explosions actually create dust," says Richard K. Barry of NASA Goddard, lead author of the paper on the Keck Nuller observations, which will be published in the Astrophysical Journal. 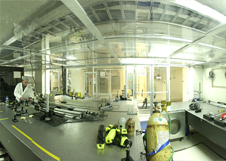 Image right: A fisheye view of the combining lab in the basement of the Keck Observatory, where starlight from each telescope is steered through an intricate network of mirrors and optics, then combined and manipulated. Click image for enlargement. Credit: NASA/JPL/Keck

The team thinks the dust is created as the white dwarf plows through the red giant’s wind, creating a pinwheel pattern of higher-density regions that is reminiscent of galaxy spiral arms. Inside these spiral arms, atoms reach low enough temperatures and high enough densities to allow atoms to stick together to form dust particles. The nova’s blast wave has since destroyed RS Ophiuchi’s pinwheel pattern, but it should re-form over the next few years, and future Spitzer Space Telescope observations could see it.

Most studies of RS Ophiuchi have relied on spectroscopic models, but those methods have not been able to distinguish various nova components with as much detail as the interferometer. The Keck Nuller measured one component of the RS Ophiuchi system to an accuracy of just 4 milliarcseconds, or about the size of a basketball seen 7,500 miles away.

Barry is also coauthor of a paper based on Spitzer observations of RS Ophiuchi. This paper reports independent evidence for silicate dust that predates the 2006 explosion.

"The RS Ophiuchi observations are just a small taste of the power and potential we expect from the Keck Nuller," says second author William Danchi of NASA Goddard’s Laboratory for Exoplanets and Stellar Astrophysics. "But ultimately we want to launch a nulling interferometer into space to image extrasolar planets. These Keck results are a technological and scientific pathfinder toward that future."