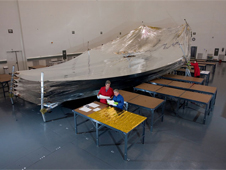 The Webb Telescope is the next-generation space observatory, designed to explore phenomena from distant galaxies to nearby planets and stars. From the origins of the universe to the formation of star systems capable of supporting life on planets such as Earth, the Webb telescope will give scientists unprecedented access to unexplored regions of space.

"The sunshield is absolutely critical to the Webb telescope mission" says Keith Parrish, JWST Sunshield Manager at NASA’s Goddard Space Flight Center, Greenbelt, Md. "It will be folded up around the telescope when the telescope is aboard its rocket during launch. The sunshield will then deploy in space to shade the sensitive, precision telescope optics and science instruments from the Sun and enable the observatory to reach its proper operating temperature and environment. Without it, the telescope and instruments can’t work. Northrop Grumman is leveraging their experience in large deployable structures in space to come up with a design that will do the job for the Webb telescope." 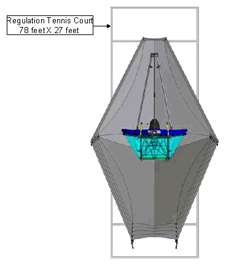 When fully deployed, the sunshield that will be about the size of a regulation tennis court. This image compares the size of the sunshield to the size of a tennis court. Credit: NASA
> Larger image The five-layer sunshield consists of extremely thin, specially coated reflective membranes and a supporting structure. The sunshield blocks solar heat, keeping the telescope’s science instruments operating at cryogenic temperatures so astronomers can study distant galaxies, young stars and planetary systems at near- and mid-infrared wavelengths.

"The completion of the preliminary design review allows the detailed engineering design to move forward and maintains the delivery schedule for the Observatory," said Martin Mohan, Program Manager for the Webb Telescope.

Completion of the preliminary sunshield design is the latest in a series of significant accomplishments. One year ago, the Northrop Grumman engineers developing sunshield membrane materials demonstrated that the sunshield prototype material had been successfully tested, functioning as predicted, in a relevant environment (simulating space).

Northrop Grumman is the prime contractor for the Webb Telescope, leading the design and development effort under contract to NASA Goddard. It is scheduled for launch in 2013.