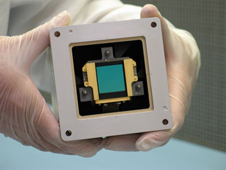 This model of the MIRI detector (in green) is similar to the charge-coupled devices in digital cameras. It's housed in the brick-like unit called a focal plane module.
Credit: NASA JPL-CalTech
> Larger image

You might think that shaking and freezing a state-of-the-art, meticulously crafted machine is a bad idea. But when it comes to firing telescopes and their instruments into the frigid cold of space, the more you test your hardware, the better.

Development models for components of the Mid-Infrared Instrument on NASA's James Webb Space Telescope have now passed a series of temperature and vibration tests. Now that engineers know the models could survive the ride to space, they have begun building parts of the actual instrument.

"Our models went through some harsh abuse and survived," said Michael Ressler, the project scientist for the Mid-Infrared Instrument at NASA's Jet Propulsion Laboratory, Pasadena, Calif., where the tests were performed.

The Webb telescope will be the most sensitive infrared space telescope ever built. Its many pursuits include: seeing the farthest galaxies in the universe and the light of the first stars; studying young planetary systems; and looking for conditions suitable for life on planets around other stars.

The Mid-Infrared Instrument is the telescope's longest-wavelength instrument and will operate between so-called mid-infrared wavelengths of 5 through 28.5 microns (a micron is about 1/100 the width of a human hair). It will be the most sensitive mid-infrared detector ever flown in space.

NASA JPL's Mike Ressler, MIRI Project Scientist (right) and Kalyani Sukhatme, Focal Plane Module Project Element Manager, in a clean room.
Credit: NASA JPL-CalTech
> Larger image
Infrared instruments are extremely sensitive to heat, so they must be kept icy cold. A refrigerator system onboard the Webb telescope will chill the Mid-Infrared Instrument down to temperatures as low as 7 Kelvin (about 266 degrees below zero Celsius) -- significantly colder than the telescope's other instruments.

When designing the Mid-Infrared Instrument, engineers have to take this cold temperature into account. The instrument will have three detectors housed in insulated, brick-like structures called focal plane modules. The detectors have to be perfectly aligned within these brick structures, so that when the chill shrinks the various materials, they do not become misaligned.

"Different materials shrink by varying amounts when cooled. The materials we are using in the focal plane modules can shrink as much as 200 microns. Our instrument alignment needs to be within 50 microns, so it's crucial that our instrument design accounts for the varying thermal contractions at cold temperatures," said Kalyani Sukhatme, the project element manager for the focal plane modules at JPL.

In addition to temperature threats, the focal plane modules will undergo extreme rattles and shakes during launch -- further opportunities to become misaligned.

Because models for these focal plane modules have now officially passed temperature and vibration tests, one of the actual, or "flight," modules has been built and is currently going through its testing.

All three flight detectors have been delivered to JPL from Raytheon Vision Systems in Goleta, Calif.

NASA's Goddard Space Flight Center in Greenbelt, Md. is managing the overall development effort for the Webb telescope. The Mid-Infrared Instrument is an international collaboration between NASA and the European Space Agency. Its focal plane modules, related electronics and software are being built at JPL. The instrument's cooler is being built by Northrop Grumman Space Technologies in Redondo Beach, Calif., and managed by JPL. The instrument's optics are being built by an international consortium of European astronomical institutes.

More information on the James Webb Space Telescope is at:
http://jwst.gsfc.nasa.gov

More information on Mid-Infrared Instrument science is at:
http://ircamera.as.arizona.edu/MIRI/page2.htm

Information on the European Mid-Infrared Instrument partners can be found at:
http://www.roe.ac.uk/ukatc/consortium/miri/index.html

Information about the electromagnetic spectrum is at:
http://science.hq.nasa.gov/kids/imagers/ems/infrared.html