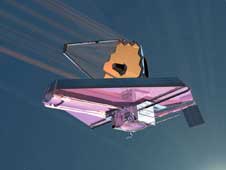 This 2,000 square-foot exhibit has a new interactive companion, the successor to Hubble, the James Webb Space Telescope.

The exhibition immerses visitors in the magnificence and mystery of the Hubble mission. A scale model of the Hubble is the focal point of the installation. "Satellite" units incorporate hands-on activities about how the telescope works, and feature Hubble's contributions to the exploration of planets, stars, galaxies, and the universe.

The exhibit contains images and data taken from Hubble of planets, galaxies, black holes, and many other fascinating cosmic entities. The exhibit is comprised of backlit color images and numerous interactive displays. Using a computer, visitors will be able to "hit" Jupiter with a comet and attempt to put star clusters in order of age. Using an infrared camera, visitors can also learn about the different wavelengths of light by taking pictures of their hand in visible and infrared light.

Through computer games, videos and displays, visitors will also be able to experience how the Webb telescope will work. Exhibit visitors will learn about the cutting-edge technology of the Webb telescope like one that will see the universe in infrared light. All the new technology will enable scientists to see farther back in time than any other satellite in existence and make many scientific breakthroughs.

Several interactive games are also featured in the exhibit. You can step through distances in the universe with the "Cosmic Distance Scale"; and "Scope it Out!" teaches players about two different types of telescopes and shows how the Webb telescope is similar, yet different than other telescopes.

One display will offer a comparison between the Hubble and the Webb telescope. One eye-catching thing is the difference in the size of the mirrors on the Webb, versus the Hubble. Webb will have a much larger mirror, which means it will have excellent resolution. The completed primary mirror will be 6.6 meters (7.2 yards) in diameter, about 2.75 times larger than the Hubble's primary mirror, which is 2.4 meters (2.6 yards) in diameter.

Viewers will learn about the engineering challenges of the mission, such as folding the telescope up in the rocket for launch, and unfolding it once deployed in space. The exhibit is also available on-line at the Webb telescope web site.

The Hubble traveling exhibit was developed by the Space Telescope Science Institute and the Smithsonian Institution Traveling Exhibition Service. This 2,000 square foot traveling exhibition has been fully updated and is now available at low cost directly from the Hubble Project Office at NASA Goddard.

The exhibit will be in Ann Arbor through July 5 and then will open at the Buffalo, N.Y. Museum of Science in mid-July.

For more information on the Traveling Exhibit, visit:
http://hubblesource.stsci.edu/exhibits/traveling/index_02.php

For information about the Exhibit Museum of Natural History, visit:
http://www.lsa.umich.edu/ExhibitMuseum

For more information about the Hubble Space Telescope, visit:
http://hubble.nasa.gov
› Back To Top