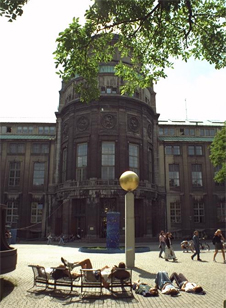 The actual James Webb Space Telescope is in the process of being built. Once it launches in 2013 it will find the first galaxies and will peer through dusty clouds to see stars forming planetary systems, connecting the Milky Way to our own Solar System. Webb's instruments have been designed to work primarily in the infrared range of the electromagnetic spectrum, with some capability in the visible range.

In the meantime, a life-sized model of the Webb telescope was built by Northrop Grumman to give the viewing public here on Earth a better understanding of the size, scale and complexity of this breakthrough satellite. Northrop Grumman Corporation, Redondo Beach, Calif. and many other U.S. and international partners are working with NASA to build the actual telescope and technologies.

The Deutsches Museum in Munich, Germany has over 100,000 objects from the fields of science and technology. The exhibits and collections cover all areas of science and technology from mining to atomic physics, to biology. They extend from the Stone Age to the present time. Collecting historically significant objects is still one of the Museum’s central tasks, and the Webb telescope model makes a nice temporary exhibit to showcase the next generation of space telescopes.

“The Deutsches Museum is home to a beautiful telescope collection, including the Fraunhofer Refractor, used to discover Neptune. It’s wonderful to bring the James Webb Space Telescope model here so that people see both historical and state-of-the-art astronomical instruments,” said Eric Smith, James Webb Space Telescope Program Scientist at NASA Headquarters, Washington. "The timing is perfect because in October, there is a workshop meeting of the Webb telescope scientists and engineers nearby, so people working on the project can get to see the life-sized model." EADS Astrium, one of the international partners currently working to build Webb, is hosting both the workshop and the display of the model in Munich. 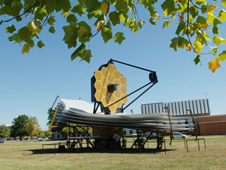 The full-scale model was assembled on the lawn at Goddard Space Flight Center, and displayed between Sept. 19 and Sept. 25, 2005. Credit: NASA
> Larger image EADS Astrium GmbH, with several locations in Germany, is partnering with NASA to sponsor the model display. They are also building the Near Infrared Spectrograph or NIRSpec instrument for the Webb telescope, one of four science instruments onboard the observatory. The 200kg spectrograph will be able to detect extremely faint radiation from some of the most distant galaxies and observe more than 100 objects simultaneously.

The model was specifically designed for an environment subject to gravity and weather. It is constructed mainly of aluminum and steel, weighs 12,000 lbs., and is approximately 80 feet long, 40 feet wide and 40 feet tall. The model requires 2 trucks to ship it and assembly takes a crew of 12 approximately four days. Funds used to build the model were provided solely by Northrop Grumman.

> The James Webb Space Telescope
> The Deutsches Museum
› Back To Top