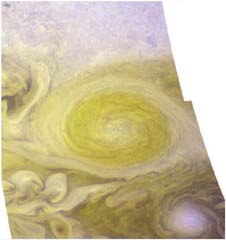 In this quasi-true-color view of Jupiter's Little Red Spot, generated using a New Horizons-LORRI mosaic in the red and green channels and a Hubble Space Telescope 410 nm map in the blue channel, the "LRS" appears with distinctly redder color than the south tropical disturbance to the north or the small oval to the southeast. Credit: NASA/Johns Hopkins University Applied Physics Laboratory/Southwest Research Institute/HST
>More Images
This fearsome storm has been growing since 1998, with the merger of three smaller white storms that had been observed since the 1930s. Two of these storms coalesced in 1998, and the combined pair merged with a third major Jovian storm in 2000. In late 2005 — for reasons still unknown — the combined storm turned red.

The LRS is as red as the similar, but even larger and better known, Great Red Spot (or GRS). Like the GRS, Jupiter’s "LRS" is an anticyclone, a storm whose winds circulate in the opposite direction to that of a cyclone (hurricane) – counterclockwise, in this case.

Using data from NASA’s New Horizons spacecraft and two telescopes at Earth, an international team of scientists confirmed that wind speeds in the LRS have increased substantially over the wind speeds in the precursor storms, which had been observed by NASA’s Voyager and Galileo missions in past decades.

"This storm is still developing, and some of the changes remain mysterious," says Dr. Andrew Cheng of the Johns Hopkins University Applied Physics Laboratory (APL), Laurel, Md., who led the study team. "This unique set of observations is giving us hints about the storm’s structure and makeup; from this, we expect to learn much more about how these large atmospheric disturbances form on worlds across the solar system." The team will publish its work in the June 2008 Astronomical Journal.

Dr. Amy Simon-Miller, a researcher at NASA's Goddard Space Flight Center in Greenbelt, Md., and Irene Tsavaris, a summer student from the University of Maryland College Park who assisted Simon-Miller, generated all of the wind speed and direction measurements in the paper using a manual tracking technique on the New Horizons and Hubble Space Telescope data. Simon-Miller also created the color composite of Hubble and New Horizons data, and generated the figures for the paper.

Scientists combined LORRI image maps of cloud motions with visible-color images from Hubble, and mid-infrared images from the European Southern Observatory's Very Large Telescope, perched on an Atacama Desert mountain in Chile. The latter technique allows scientists to "see" thermal structure and dynamics beneath the visible cloud layers, because thermal infrared wavelengths (indicating heat) can pass through the higher clouds. "The new observations confirm that the thermal structures, wind speeds, and cloud features of the LRS are very similar to those of the GRS," says Dr. Hal Weaver, a member of the study team from APL and the New Horizons Project Scientist. "Both the LRS and the GRS extend into the stratosphere, to far higher altitudes than for the smaller storms on Jupiter."

The observations offer clues to the mystery of why the GRS, and now also the LRS, may be so red. The wind speeds and overall strength of the LRS increased substantially in the seven years between the Galileo and the New Horizons observations, during which the storm became red. "This supports the idea that a common dynamical mechanism explains the reddening of the two largest anticyclonic systems on Jupiter, one possibility of which is that storm winds dredge up material from below," says Simon-Miller.

"We can say that the LRS is currently still red, though it may have changed appearance slightly from last year with more white clouds in the center. We will confirm this with the Hubble Space Telescope in May, June, and July, as the LRS passes the GRS. These passages occur roughly every two years, but we are particularly interested in this year's passage because last year saw Jupiter undergo a global upheaval, with many belts and zones changing colors. The change in activity has all sorts of potential for further changes, especially when the LRS gets bumped around a bit by passing the GRS. Both storms deflect wind jets around their perimeters, and the compression of those jets between the LRS and GRS will force the oval slightly southward; we are most likely to see changes after such a passage as the winds and storms re-adjust," said Simon-Miller.

"The LRS will continue to evolve, as the GRS does. Nothing on Jupiter remains the same. In terms of size growth, it can't really grow in latitude, as it is bound by Jupiter's zonal winds. That can change slightly, and it could expand in longitude, though we haven't seen them ever really do that (both the GRS and predecessor ovals have shrunk in longitudinal extent over the years). As for whether the wind speed in the LRS will continue to increase, we have no idea, although there should be a theoretical limit, based on the atmospheric temperature, composition, etc." said Simon-Miller.

The LRS already rivals the steadily shrinking GRS in size and wind speed. The new thermal and wind field observations hint at an interaction between the south tropical disturbance, the Little Red Spot, and a warm cyclonic region south of the LRS, forming a complex that could dwarf the Great Red Spot.

For more images, refer to: