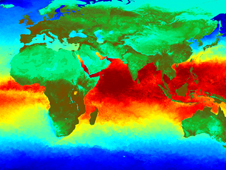 Sea surface temperatures and land vegetation over the Indian Ocean are seen below in a visualization created with data from 1994 to 2005 from the Pathfinder satellite dataset. Credit: NASA
> Larger image GREENBELT, Md. -- A new study, co-funded by NASA, has identified a link between a warming Indian Ocean and less rainfall in eastern and southern Africa. Computer models and observations show a decline in rainfall, with implications for the region's food security.

Rainfall in eastern Africa during the rainy season, which runs from March through May, has declined about 15 percent since the 1980s, according to records from ground stations and satellites. Statistical analyses show that this decline is due to irregularities in the transport of moisture between the ocean and land, brought about by rising Indian Ocean temperatures, according to research published today in Proceedings of the National Academy of Sciences. This interdisciplinary study was organized to support U.S. Agency for International Development's Famine Early Warning Systems Network.

"The last 10 to 15 years have seen particularly dangerous declines in rainfall in sensitive ecosystems in East Africa, such as Somalia and eastern Ethiopia," said Molly Brown of NASA's Goddard Space Flight Center, Greenbelt, Md., a co-author of the study. "We wanted to know if the trend would continue or if it would start getting wetter."

To find out, the team analyzed historical seasonal rainfall data over the Indian Ocean and the eastern seaboard of Africa from 1950 to 2005. The NASA Global Precipitation Climatology Project's rainfall dataset provided a series of data covering both the land and the oceans. They found that declines in rainfall in Ethiopia, Kenya, Tanzania, Zambia, Malawi and Zimbabwe were linked to increases in rainfall over the ocean.

The team used computer models that describe the atmosphere and historical climate data to identify and validate the source of this link. Lead author Chris Funk of the University of California, Santa Barbara, and colleagues showed that the movement of moisture onshore was disrupted by increased rainfall over the ocean. 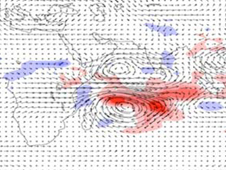 Arrows show the simulated movement of moisture, and blue to red colors indicate variations in cool to warm sea surface temperatures. Credit: Mathew Barlow/University of Massachusetts
> Larger image Funk and colleagues used a computer model from the National Center for Atmospheric Research to confirm their findings. The combination of evidence from models and historical data strongly suggest that human-caused warming of the Indian Ocean leads to an increase of rainfall over the ocean, which in turn adds energy to the atmosphere. Models showed that indeed, the added energy could create a weather pattern that reduces the flow of moisture onshore and bring dry air down over the African continent, reducing rainfall.

Next, the team investigated whether or not the decline in rainfall over eastern Africa would continue. Under guidance from researchers at USGS, which co-funded the study, the team looked at 11 climate models to simulate rainfall changes in the future. Ten of the 11 models agreed that though 2050, rainfall over the Indian Ocean would continue to increase -- depriving Africa's eastern seaboard of rainfall.

"We can be quite certain that the decline in rainfall has been substantial and will continue to be," Funk said. "This 15 percent decrease every 20-25 years is likely to continue."

The trend toward dryer rainy seasons in eastern and southern Africa directly impacts agricultural productivity. To evaluate how potential future rainfall scenarios and shifts in agriculture could affect undernourishment, the team came up with a "food-balance indicator" model. The model considers factors such as growing-season rainfall, fertilizer, seed use, crop area and population to estimate the number of undernourished people a region can anticipate.

Continuing along a "business as usual" scenario -- with current trends in declining rainfall and agricultural capacity continuing as it is currently to 2030, the team found that the number of undernourished people will increase by more than 50 percent in eastern Africa.

Still, the food-balance indicator also showed that in the face of a continuation of the current downward trend in rainfall, even modest increases in agricultural capacity could reduce the number of undernourished people by 40 percent.

"A strong commitment to agricultural development by both African nations and the international community could lead fairly quickly to a more food-secure Africa," Funk said.
› Back To Top